I spent Victoria Day Monday out in Steinbach at the Mennonite Heritage Village—a perfect way to enjoy a warm May afternoon. It's less than an hour's drive away from Winnipeg. Upon arrival we were transplanted to another time. And since I love history, I was as happy as a duck in water. We started with the indoor exhibit which featured maps, photographs and background information about the Mennonite migrations.  I was especially interested in the artifacts that pertained to the children and women and to any Soviet connections. The Russian Mennonite story is similar to the Volhynian Germans.  More than 20,000 Mennonites came from Russia during the 1920s and thousands more came after the Second World War.

The Mennonites have always placed much importance on family and on education. There were clothes, books, school supplies and even hundred-year-old toys on display. A couple of dolls reminded me of the clay-headed doll with the soft body that I crafted last month with my Russian instructor. 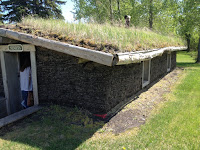 Clay was also the building material for a sod hut, called a Semlin, built by early settlers for their temporary lodgings. We got to walk through one with a particularly tragic story attached to it. Severe weather and disease took its toll on early settlers. We have much to be grateful for—homes with central heating, plenty of easily obtained food, along with advances in medicine and technology. 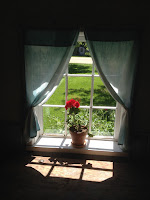 This village is sort of the Mennonite equivalent to Lower Fort Gary (built by the Hudson's Bay Company)—minus the fortifications. Perhaps Mennonites used their faith as a shield, rather than walls of stone. They are well-known pacifists. Many immigrated to Manitoba from Russia to avoid the draft. Their thriving communities are a testament to the strength of peace.

Back to the tour. On this particular day—tulips, lilacs and picture-perfect geraniums added to the quaint domesticity of the village. A shy young donkey refused to bray for me. But the lambs bleated and goat kids were eager for pets from human kids. Beautiful, strong horses trotted by proudly pulling a carriage load of visitors.

For me, the centre point of the village is its beautiful windmill. I couldn’t help but think of my own grandfather’s windmill—broken by communism and hate—during the anti-kulak campaign under Stalin.  Climbing up the innards of this windmill I imagined my mother seeking shelter in the windmill during a storm. The only thing missing were the storks. 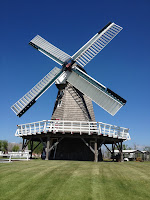 Anyone looking for a day trip out of Winnipeg—consider exploring the Mennonite Heritage Museum. It’s educational and fun for all ages.  You don’t even need to bring lunch. There’s a restaurant and lots of traditional farm cooking available.  And, you don’t even have to be Mennonite to enjoy it.

Beautiful time of year. I'm sitting in my garden surrounded by the energy of new growth. But what was May like back in 1945?  I’m researching another novel and re-confirming that when the Second World War ended, everybody didn’t just pack up their war toys and go home. For some, like my mom, there was no home and any blossoms reflected only a cruel irony.

Back in old East Prussia, Hitler had retreated from the Wolfschanze (Wolf’s Lair) his eastern war headquarters and the bunkers were blown up in January, '45 just before the Soviets arrived. (The Wolfschanze is where Stauffenberg attempted to assassinate Hitler back in July of  '44.)

While Hitler made his getaway, my mom and millions like her, were ordered to stay put. Any attempt to retreat west was viewed as treason. And so the East Prussians celebrated a final Christmas in their homes before the biggest offensive ever assembled began on January 12th.  The Nazis had focused their troops on the Western front and completely underestimated Stalin’s forces. They were now outnumbered: 250, 000 Soviets vs. 30,000 Germans.

But it was more than just the numbers that spelled defeat. The Soviets were fired up with revenge, while the German soldiers were tired and discouraged.  Nazi atrocities were beyond despicable and soon it would be the German women, children and elderly who would bare the brunt of the Soviet wrath.

So by May of 1945, Hitler was dead, the Wehrmacht was kaput and there was no one left to defend the defenseless. May, 1945 in East Prussia was a cruel spring—crueler than any indecisive weather of April could ever be. Rape, hunger and disease flourished alongside the linden and chestnut blossoms.

I’ve just finished re-reading “A Terrible Revenge” by Alfred-Maurice de Zayas. It’s filled with memories similar to conversations I've shared with older Canadians of Eastern European origin—survivors of that revenge. They were children and teenagers during that ugly spring ending the war. Now that they’re old, horrific memories leak out and I want to hear them—before they all get lost by the power of time.  Eleven million Germans were displaced after the war. Many came to Canada to start over...to forget.  And then these darn writer types start asking questions.  What does it mean to lose your home? Maybe the people in Ft. McMurray know.  I can only imagine.

The fact that a song about a 1944 atrocity can win the 2016 Eurovision Song Contest proves that our histories continue to be relevant even on this beautiful spring day. Art echoes history. We can listen, read, and grow wiser. Or not. It's our choice. We always have a choice.