Reflections on the Holocaust

I’ve been reading When Time Stopped by Arianna Neumann this past week, coinciding with Holocaust Remembrance Day, quite by accident. 76 years since the Soviets liberated Ausschwitz-Birkenau in Poland. The book is having a powerful effect on me. Arianna writes about a Jewish father she never really knew. After he dies, she sleuths together his war experiences with dogged determination . . .  not easy. After all, she grew up in Caracas, far from Europe and went to a Catholic school.

I chose to read her book in part, because I’ve been working on a novel that’s mostly memoir about my own father. I workshopped it with Sage Hill last summer and while I’m letting it simmer on a back burner right now, its scent permeates my mind.

Arianna’s father, using an assumed name, was able to survive the Holocaust—physically. But we all know that health is about more than just our bodies.

Daughters and fathers often have complex but important relationships. Famous father/daughter pairings include Svetlana with her father, Stalin, in politics and Scout and Atticus in literature's To Kill a Mockingbird. My own father talked little about his war experiences and I’ve had to figure it out mostly on my own.

Of course, I’ll never get it right. But I can try. Arianna Neumann’s memoir about her father, an innocent victim of the Nazis, makes me even more determined to understand my own father, one of that war's perpetrators. 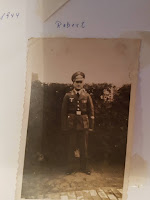 I know some people find evil too loathing to look at. But it’s my belief, that unless we study and understand the motivation for evil, it will continue to flourish. We are human beings, each capable for good and for evil. It’s not ‘the other’. It’s in my own reflection. I find this to be frightening, but also empowering, because I can do something about that reflection.

Of Owls and Cats

I fell asleep to the sound of two hoot owls last night—one close by, the other farther away. Were they establishing their territories or embracing supremacy over our sleeping suburb? Twenty-five degrees on the minus side today. Minus thirty overnight. We have January weather in January. Feels right. When I delivered mail, I loved walking in the cold with the snow like concrete under my cleats and the Manitoba sun brilliant between the sundogs. I seriously liked it better than a muggy plus-thirty day in July. The trick was to keep moving and to stoke that furnace. That’s when my love affair with porridge began and when my relationship with coffee . . . changed. Too many layers to take off and on for a quick trip to the washroom. Oh, and the layers, yes. They are key to embracing any kind of weather. Sort of like life. Layers are a veil of protection, like masks—metaphorical and medical.

My mom never forgave me for earning a living delivering mail . . . said she never survived Siberia so that her daughter could freeze here in Canada. So I keep writing about her hard life, hoping somehow to make it up to her . . . so she can still sort of be proud of me. The child in me yearns for her approval. 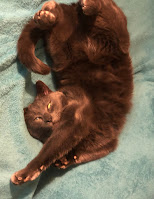 Tiberius, the cat, poked his head out into the cold this morning and growled at the blast of cold like it was some sort of invisible monster. Last week of January, I tell him. Enjoy it before it’s gone! Instead he hissed at me like it was all my fault and pattered back to the couch, snuggling into oblivion.

A little bit about Trakehner horses. The what, where, when and why.                            What?Trakehner horses are a multi-coloured, warmblood breed originating in the former East Prussia. (Warmblood means they have speed and endurance, cavalry material . . . as opposed to a drafthorse which is coldblooded and used for slower, heavier work.) They are identified through branding with the East Prussian moose antler.
Where?

The town of Trakehnen was established back in 1731 by the Prussian cavalry. On January 20th, 1945, the state-run stud farm was abandoned as the Soviets approached. Today, while almost completely destroyed at the end of the Second World, the Trakehner has once emerged as a strong horse, admired throughout the world. Now you can ride Trakehner horses even here in Canada.

Because as I explored my mom’s ‘quiet’ years, I learned that as a young woman, she worked as a servant girl for East Prussian estate owners.  I soon discovered that East Prussia was well known not only for its idyllic countryside with pastures for grazing horses, but for a specific type of horse. Setting a novel against the background of breeding perfect horses was an opportunity to explore the Nazi obsession with bloodlines and their quest for perfection.

While my dad focused on a thoughtful game of chess, other family members sometimes played the most frustrating game in the world, Mensch Ärgere Dich Nicht. The literal translation is, Man, Don’t Get Frustrated. English-speakers might know it as Trouble or Parcheesi. It’s a four-person game and works well when there are little kids around who can’t read, but know their colours and can count up to six. It’s a game focused almost completely on chance.

Our own family edition, taped and re-taped, includes only an incomplete set of the wooden game pieces. I regret not buying one in pristine condition at a yard sale a couple of years ago because, as frustrating and boring as the game was, it represents many hours spent around the tables of my childhood. I looked online and was surprised to see that it’s still available—still looking the same.

The original German game came out in 1914 and has been the most popular board game in that country ever since. The German post office even issued a stamp in 2014 to celebrate its 100th anniversary. Other countries have games similar to this one with even older histories.

I’m wondering why German families found this particular game so compelling? Was it because they identified with the frustrations of not achieving their goals?  Was is about the dice—that destiny changes with the roll of the dice?

It’s sort of like that Serenity Prayer. Mensch, ärger Dich nicht.  Accept the things you cannot change . . . like the roll of the dice. No mention of guilt for kicking someone out of the way. There’s a variation of the game that addresses that potential guilt. We played it when I was older. It had a touch more strategy, too.  Sorry!—the game’s name says it all. You’re in my way, sorry. I guess we all feel a bit guilty when we push someone away from achieving their goals.  (Because I’m so involved with the domestics around Second World War research, I'm thinking of Hitler invading the rest of Europe. Sorry, you're in the wrong place.)

And then later, all those refugees. . . like my mom . . .  unable to get 'home' on the playing field. Maybe that's what she liked about Mensch Ärgere Dich Nicht. It reflected her life.

On the other hand, maybe that’s why my dad embraced chess. He had little control over the events of his life, but chess gave him back some control. Chess isn’t about rolling the dice and accepting one’s fate.  Chess is about anticipating your opponent’s next move.

Still, there’s a time when rolling the dice seems like the ultimate way to abscond responsibility. Me? My favourite game has been Settlers of Catan. Hmm. I wonder what that means?

During 2020, while out walking and biking or gardening and decluttering, I was mostly alone (well, often with the grand-canine) and I loved it!  It gave me plenty of time to muddle about with words. Finding the right word is a thrill, sort of like finding a perfect stone. 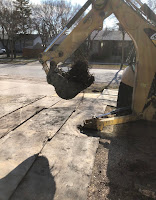 Back in January, pre-COVID, I'd chosen own it as my guiding words for the year. Later, I breathed those two little words in on the muddiest days—when I was stuck in a pandemic rut—and they recharged me. Own it were the right words, in the right year, for me.

For 2021, I’ve chosen the word opportunity and already I'm energized by its possibilities.

To start the year off, I’m engaging in a new opportunity, offered through IBBY, of reading online with refugee children. The isolation of the pandemic is, no doubt, particularly hard on people who live on the fringes of our society and this includes newcomers, especially refugees,  already isolated because of language and culture.  I'm hoping I don't get zoomed out. Online and on-screen is not my favourite place to be.

Last year we had an excavation on our property to repair a broken sewer line. Now that the ground has settled (it looked like a construction site all last summer), do I replace the broken lawn with more grass? Or . . . do I see it as an opportunity to grow something else?

Pinch me! Why am I so privileged to have a home with a lawn, a steady retirement income, and, so far . . . good health? Here’s to 2021—each day full of opportunity . . . even if physically distanced.