Just finished Timothy Snyder's book, Bloodlands, Europe Between Hitler and Stalin. What a heavy read. It's mind-numbing. Page after page of senseless deaths reported.
The area that Snyder refers to includes most of present-day Poland, Ukraine, and Belarus, plus Lithuania, Latvia, Estonia, and western Russia. 14 million people. And this is just the 'non-combatants.' He's including the years of the Holodomor and the Great Terror, but
excluding the people collectivized under Stalin's First Five Year Plan. 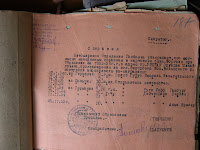 If you think things were bad during those years, think again. They were, in fact, much worse. The camps liberated by the Allies in '45 were just the tip of the iceberg.
In one of the early chapters, Synder writes about the victims of the Great Terror. My grandfather was shot in September, 1937. His crime was documented and filed and I was able to read the interrogation proceedings, back in 2004. Part of my grandfather's crime was requesting and receiving food aid during the famine in 1933. Here's an image of those 'top secret' files

listing the letters, the amount of money involved and the dates.
And now, through Synder's book, I'm able to identify the weapon that was used. Here's a quote from the book (p. 83) describing that 1937/8 kulak operation:
"The killings were always carried out at night, and in seclusion ... The executioners were always NKVD officers, generally using a Nagan pistol. (Image of weapon from World Gun website) While two men held a prisoner by his arms, the executioner would fire a single shot from behind into the base of the skull, and then often a 'control shot' into the temple." The bodies were then dumped into prepared ditches. This is a photo of my grandfather's ditch, here. 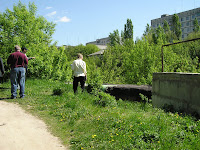 Having a researcher like Timothy Synder corroborate my own findings about my missing grandfather is empowering. I want to share one more powerful quote from Snyder's closing paragraph.
"The Nazi and Soviet regimes turned people into numbers...It is for us as scholars to seek these numbers and to put them into perspective. It is for us as humanists to turn the numbers back into people. If we cannot do that, then Hitler and Stalin have shaped not only our world, but our humanity." (The Bloodlands, p.408) 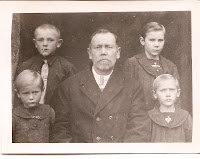 Here's my grandfather's face. He once had a wife and a family. He had a home, a bit of land, a windmill and a purpose for living. For this, Stalin killed him - one of the 14 million.
at February 27, 2011 3 comments:

From the Rhine to the Red River

I'm meandering around so much in the real world, that my online meandering has lagged behind. But I do want to continue this blog and will make every attempt to write a weekly post.
I've just finished a memoir by Anne Ullenboom Van Humbeck called From the Rhine to the Red River. This self- published book is a story of a woman and her family. It's written with warmth and humor. I especially enjoyed the first half where she shares her childhood war memories and then later, her first years in Canada as a newlywed and parent. My parents, too, were immigrants from Germany and so I always find it interesting how other families experienced the transition.
This is the second self-published book I've read this year and I must admit, I am impressed with the quality of the copy-editing and especially, with the strength of the writing. Again, a beautiful cover and a great read!
at February 19, 2011 1 comment:

Email ThisBlogThis!Share to TwitterShare to FacebookShare to Pinterest
Labels: Anne Ullenboom Van Humbeck From the Rhine to the Red River