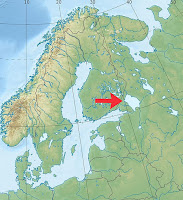 Doug Speirs wrote an article for the Winnipeg Free Press on January 10th which offered up a big photo of local artist, Jordan Van Sewell and his art installation set on the Red River. It’s of horse heads peeking out of the snowy river and immediately reminded me of something I read last winter.

It was in a book I'd picked up at a local mall during a secondhand book fundraiser. The book, Pferd und Reiter im II. Weltkrieg, by Janusz Piekalkiewicz, was published in 1976.  I'd been interested in learning about the East Prussian breed, Trakehner, and this book had many photographs. Sad photos.

It was not good to be a horse during the Second World War. Their deaths were often gruesome. If they weren't worked to death, then they froze, starved, were shot, burned, got stuck in mud and swamps, or drowned.

One Italian memorist, Curzio Malaparte, shared an especially horrendous story in his book, Kaputt, which has not proven.  It supposedly happened on Lake Ladoga (see arrow on map) during the Siege of Leningrad. An ice road had been built and maintained by the Finns. This 28 kilometer winter road became known as the “Road of Life,” and helped save many lives in the besieged city.

According to Malaparte, back in the winter of 1941/2, a thousand horses, trying to escape a forest fire, ran into open water which flash froze and in a matter of hours, froze to death. . . only their heads visible.  The science behind flash freezing is discussed here.

Guy Madden, in his film, My Winnipeg, has a clip of frozen horse heads, and a Swedish artist, Andre Prah, has been remembering that Ladoga tragedy by recreating the frozen horses using driftwood from the Baltic.  Here's a you tube clip of his art. Or visit his Facebook page here. Amazing.

I'm not sure I want to see the local horse heads on the Red River. Seems too gruesome. Or maybe I've just read too much war horror.
at January 31, 2018 No comments:

I don't watch a lot of movies, so when I do, it's a memorable experience.  I recently viewed the movie Darkest Hour featuring Gary Oldman, as Winston Churchill. I've been immersed in everything related to the Second World War for a while now, as I try and reimagine my family’s past. Most of my recent immersion has been looking at the German point of view, (after all, I've gone through an education system with the Allied's point of view).  Don't get me wrong...I understand that Hitler's vision was toxic. The Nazis were evil. The more I learn about them, the more they disgust me. . . the more I want to understand how ordinary people could buy into their vision.

Spring, 1940, was a pivotal time for both Hitler and the rest of the world. Will the English surrender…like the Austrians or the Czechs before them? Or will they be crushed as easily as the Poles?  At what cost?

One engaging scene in the movie occurs when Churchill's secretary reveals she hasn't heard from her brother who's stuck in Dunkirk.  Another emotional scene is, of course, the one everyone mentions—the subway scene. Here, Churchill rides the Tube and engages in conversation with ordinary citizens. The scene is heartwarming and gushingly patriotic . . ..   It also never happened.

As someone who writes historical fiction I understand the issues of ‘based on’ and ‘inspired by.’ That scene on the subway is obviously true to the latter. It is ‘inspired by’ Churchill’s effort to hear the average Londoner’s voice. But it is not ‘based on’ an actual event. Such is fiction. You dig between the facts and create a story that will engage and entertain. Truth is somewhere between the lines or the scenes.

There are people who will only read non-fiction or who will only watch documentaries. They think that truth can only be achieved through hard fact. Truth is not that simple.  Even a photograph can lie. Diaries, memoirs and autobiographies can’t be trusted either. Truth is not limited to facts. Facts do not always reflect truth. All we can do is read, watch or listen with an open mind.  And what is an open mind, you ask? Ah. Maybe it’s a mind that questions, that doesn’t judge, and that’s flexible. That would work, for starters.

That's why i just love the story about the seven blind mice. Each mouse only experiences a part of the unknown, but together they piece the mystery together.
at January 25, 2018 No comments:

Drugs: then and now

Crystal meth, called jib on the street, has been in Winnipeg's news much too often lately. At Christmas, a young mother died of exposure after seeking help for her meth addiction. It seems to be a modern problem…a modern addiction…and yet crystal meth was a common drug in Nazi Germany.
Back then, it was called Pervitin. A recent book, Der totale Rausch (English: Blitzed) by Norman Ohler, looks at how drugs influenced the Second World War. Pervitin was invented in 1938 and by 1940 prescribed, by the millions, to troops and civilians alike. Doctors prescribed it not only for mental health issues, but also to help with childbirth or hay fever.
What’s it good for? Treats depression. Increases alertness...to the point where users don’t sleep for up to two weeks. It reduces inhibitions. too. Sounds like a combination of the effects of coffee plus alcohol.
What’s bad about it? It’s addictive. And when users can’t get the drug they crave, they become aggressive and violent.

Wouldn't be much of war if soldiers took meditation breaks. Aggression might have been a positive quality during the war, but it’s a dangerous side effect in peace times.

Addictive drugs continue to camouflage mental health issues. Our society puts much emphasis on physical health, but it seems there's still not enough support for mind issues.
Mental health affects us all.

January. The month of new beginnings. Nothing new here. My planned book is not coming out, I’m not going on any exotic travels, and there are no weddings or grandchildren in my family's future. 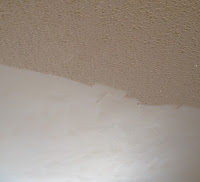 What’s a writer to do for fun? Besides writing and reading? How about scraping stipple? Yeah. Deep breath. I figured January was a great month to finally scrape the decades-old bubbles off my living room area. And you know what? It feels good.

I actually think this will help my writing. All those dust bunnies clinging to the mini-stalactites have got to go. It’s kind of like editing out adverbs or my favorite over-used words like just, then or so. My ceiling is going to look so good—visitors will come over and be awestruck by the beauty of it all.

Actually, a smooth, clean ceiling gets about as much attention as a neatly edited manuscript. It’s only the errors that get noticed.

This stipple-scraping is a messy job. Speaking of messy . . . nobody said that getting published was easy and I’m not ready to give up. I figure, if I can scrape stipple off ceilings, doesn’t that qualify as tenacity? And isn’t tenacity a prime requirement of writing success? See? This isn’t just a home reno project, this is a writing exercise.

To all of you authors, grandparents and travelers . . . congratulations. I’m happy for you. As for me, I’m kind of proud of my new ceiling. Happy 2018 to everyone, whatever your definition of happy might be.  For me, right now it’s tenacity.
at January 08, 2018 2 comments: