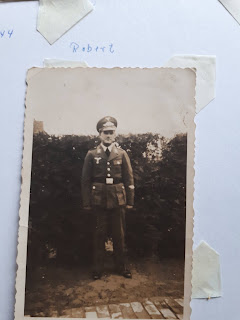 I grew up in a house with different kinds of silence. I won’t call them all secrets, because some were born of ignorance and not deliberate. My mom’s family past, for example, belonged to the former. She didn’t know what happened to her dad. She didn’t understand the politics of communism and then later, Nazism. She was an uneducated pawn, shuffled around for authoritarian agendas. First as a kulak child, later as a munitions worker, still later as a forced labourer. I couldn’t judge her as guilty, merely naïve.

My dad’s silences, however, were deliberate secrets. Some of these were based in guilt, others based in shame. The difference, you ask? In its simplest form, guilt is based on others’ judgment of you, while shame is a self-judgment. My dog might feel guilty because I caught him stealing the cat’s food, but he has no sense of shame. I might tell him he’s a bad dog, but all he wants is my approval. In fact, his only goal is to next time not be caught in the act.

My dad voluntarily joined the Luftwaffe when he was 18 in 1936. He participated in the invasion of France and once shared how he drank cognac in Cognac, France. That’s where I—the know-it-all, Canadian-born daughter—judged him as a guilty perpetrator of war. I didn’t want to hear more of his war exploits. So he kept quiet around me.

But he had other secrets. One included a failed first marriage and dead children. That was a silence I wish he’d broken, and a secret I wish he’d shared. It took a bit of sleuthing on my part, but now I can only pity him when I finally learned the details about that secret. That was his private shame. It’s a book I’ve been working on. Complicated . . . filled with guilt and with shame. There’s nothing like a mystery to keep me exploring and writing family history.

Like everyone, I’ve viewed videos of the horrible scenes at the airport in Kabul, Afghanistan. Was there no way to avoid this calamity as the Western forces withdraw and the Taliban re-establishes its sharia rule of law?

I’m reminded of what it might have been like for the East Prussian refugees clambering to board ships in the Baltic ports like Balitysk (once Pillau) and Gdynia (once Gotenhafen) under Operation Hannibal. That could have been avoided if the Nazis had only admitted defeat a few months sooner.

Back in '45, women and children lost track of each other in the mayhem at the harbours.  They had trekked to the coast to try and board ships to the relative safety of northern Germany. They tried desperately to avoid the revenge-seeking Red Army. Winter conditions were miserable. Yet the ships, like the ill-fated Wilhelm Gustloff and the von Steuben, offered only temporary refuge . . . torpedoed hours later on the icy Baltic.  More than ten thousand, mostly women and children, drowned.

In the news report I watched this week with the desperate Afghans clinging to loading ramps at the Kabul airport, I could only see men and wondered what had happened to the women and children.

Being a refugee, today from Afghanistan, a few years back from  Syria, or back in 1945 from the Soviet Army is something I’ve been lucky enough to avoid. But the word refugee or ‘Flüchtling’ in German is a word I’ve been all too familiar with. It was a label describing my own mom in the church community where I was raised and it continues to resonate with me—evoking feelings of loss, despair and poverty.

I wish today’s refugees and their children Godspeed, but they will carry the impact of this crisis with them throughout their lives. If they’re lucky, their homelessness will be temporary, but their sense of self will probably be forever damaged. Being a refugee is life-changing.

I've blogged about Sophie Scholl before and recently watched a documentary about her. What an excellent, if heart-breaking, film inspired by the two siblings behind the doomed White Rose movement. Sophie, 21, and her brother, Hans, 24, were university students in Munich when, in 1943, they were caught spreading leaflets promoting the Nazi war as a lost cause. If you haven’t seen it, and have any curiosity about the German point of view during that terrible war,  I highly recommend that you watch it.

Hans, a medical student, had spent time on the eastern front to help out with the injured during the Stalingrad battle, which many say was the turning point for the Nazis. Hans witnessed much suffering and upon his return to Munich to continue his studies, he and fellow students began writing anti-war pamphlets. This undermined the Nazi’s new approach and motto of “total war.”
Goebbels gave his infamous speech at the Berlin Sportpalast (broadcast on radio to the rest of the country) under the banner, “total war/shortest war” on February 18, 1943. It’s the exact same day that the doomed siblings were arrested.
The film highlights how fear turns people into cowards. It’s ironic that while Hitler and his cohorts were rewarding fearlessness on the battlefield with Iron Crosses and status, it was weapon-less and naïve young people who managed to conquer their own fears and call out for the truth. “The Emperor has no clothes” . . . a Hans Christian Anderson fairy tale applies here. I hope the little boy of the fairy tale met a better end than the White Rose students.
Sophie Scholl’s legacy is a hard one to follow. I have to look at my own life . . . how can I find courage to defend truth? Can I risk being ostracized for having a different viewpoint? Would I risk my life?
at August 12, 2021 No comments:

Using our Senses in Writing Life is a sensory experience and we deepen our writing by using all five senses. I try hard to weave them into my stories.

Seeing. This is an obvious one. Describing landscapes, faces, clothes, etc. is an essential part of setting and character building. The trick here is to see the detail and to focus on what matters to the story. In Tainted Amber the setting is East Prussia and I needed to travel over to that part of the world so I could see the Baltic, the chestnut and linden trees and, of course, the ubiquitous amber. 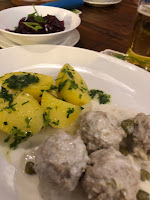 Tasting. This is a most intimate and private sense. Very subjective and very powerful. Through food, a writer has an opportunity to be culturally specific and also to use food as metaphor. Taste can also be used to show character or illness. All for the book, I got to taste-test some Jägermeister Schnapps and Königsberger Klopse.

Smelling. Smell evokes memory. Who hasn’t experienced the déjà vu of smell? Whether it’s a specific soap, the scent of a real Christmas tree, or a baby’s hair . . . we often have a visceral reaction to smell. For Tainted Amber it was smell of salt spray off the Baltic and the sweet smell of September hay that stayed with me. In my current WIP it's the smell of Kölnisches Wasser that sends me deeper into the story. 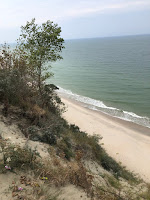 Touching. Again, this is a private sensation. Touch works well in showing relationships. It’s underused and has the ability to lessen distance with the reader. It’s a way to show love and reveal character. A tight handshake. A stiff hug. Touch can show also temperature. In Tainted Amber Katya's deepening relationship with David is shown using only the slightest touch of a hand.

Hearing. This is a shared sensation. You can hear sound with others. Whether it’s crashing waves, the crunch of boots on snow, a roaring motorcycle or the keys of a piano, using sound adds a dimension to writing that a film or audio production takes for granted. Accessing story through sound has been an important part of my writing journey.  Sound is also a way to build tension and fear as any horror film will quickly affirm. In Tainted Amber I let the roaring sea, the power of a motorcycle and the insidious music of the Horst Wessel Lied add a sense of danger to the setting.

All five of our senses have the ability to ignite emotion and it’s emotion that connects a reader to the characters and makes them come alive.

Over the holidays I saw Don’t Look Up .   The movie, with Leonardo DiCaprio and Jennifer Lawrence in lead roles, kept reminding me of Walter...