May 9th, Victory Day in Russia. 75 years. A really big deal—still. Although the pandemic has limited the crowds in Russia, over in Minsk, Belarus, crowds were as big ever. 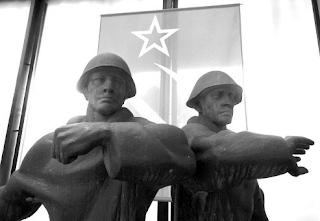 Back in May, 1945, my parents became official losers.  Soviet POWs. They didn't know each other then. In fact, my dad was married to another woman—a woman who lost track of him and subsequently, their marriage. But that's another story.

With many rail tracks broken, the defeated had to walk much of the way into the work camps. What a walk that must have been. Defeated, discouraged, guilty. Their country and their belief system crushed. Their charismatic, insane, Führer dead. Six years of sacrifice for a cause that killed millions of innocents and changed the world order. Losers in every way.

Dad headed towards Moscow, working in coal mines and using chess skills to survive. Mom ended up in an open-pit mine near Shadrinsk in the Kurgan Oblast.  Russian language skills helped her manage.

So for them the war was over but peace, freedom and mere survival were still years away.  The Soviet Union had sacrificed 26 million people in their fight against the Axis. So in May, while the victors celebrated, my parents were trudging into the enemy's backyard. No wonder they found support in each other later in the fifties.