I’m trying to understand East Prussia—past and present. Here are a few facts I’ve gleaned through my reading. East Prussia is now divided into three countries: Lithuania, Russian Federation and Poland. The Lithuanian part used to be known as Memelland with the main city being the port of Memel. Today it’s called Klaipeda.  The Russian Federation encompasses the former Königsberg (now Kaliningrad) and the former East Prussia’s northern parts. Poland gained the southern two thirds of East Prussia. These political divisions were finalized in 1946. Stalin was eager to have access to a warm seaport on the Baltic. (Now, of course—with the 2014 annexation of Crimea—Russia also warm seaports on the Black Sea. Millions of Germans were displaced. Growing up, most people of the church we attended were displaced Germans from these areas. It’s not until recently that I’ve begun to research and understand the politics behind their relocation to Canada.

I’m eager to visit the former East Prussia. The trip I’m planning involves cycling along the Baltic through three countries. It should be a good way to explore the landscape that my mom and her family traveled as they tried (and failed) to escape the Red Army. But I plan on going in September, not January.

From the book, Als die Deutsche weg waren, (After the Germans left), I get the distinct impression that the Russian Federation is not a prosperous place. It’s a wasteland—its current citizens resentful of being forced to live so far from the rest of Russia. Only Kaliningrad received a facelift, commemorating it’s 750thbirthday, back in 2005. Putin knows that many Germans are nostalgic for the old city and tourism is a big draw. I plan on celebrating my birthday this year by watching a World Cup Soccer game on TV to be played in Kaliningrad.
at April 16, 2018 No comments: 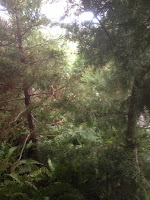 I visited the Assiniboine Park Conservatory on Good Friday to say my goodbyes to Winnipeg’s version of a jungle. It’s a place my mom and I liked to frequent—a chance to breathe tropical air during a dry prairie winter. Healthy, mature trees will need to be chopped down to make way for the future Diversity Gardens.

Along with twisted old figs and rubber trees, there’s a pair of tall hundred-year-old Norfolk Pines that won’t survive a transplant. Speaking of transplants, the pines transplanted me to a favorite book from childhood—Mutiny on the Bounty. The mutineers, (remember Fletcher Christian?), and their Polynesian wives settled first on the remote island of Pitcairn in 1790. Then in 1856, many of the Bounty ancestors transferred to the more livable Norfolk Island. The British had used Norfolk, since 1788, as a penal colony. 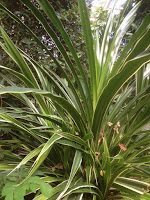 Norfolk Island was originally ‘discovered’ by Captain Cook and named after Lady Norfolk. The Norfolk Pine, featured on the island’s flag, is a popular export.
Cook thought the tall pines would make good masts for the sailing ships. I wonder what the wood of the hundred-year-old Norfolk pines here in Winnipeg will be used for?
By the way, Norfolk Island (part of Australia) is 1600 kilometers east of Sydney and more than 6000 kilometers west of Pitcairn Island.
The current population of Norfolk is about 1500. They speak English, along with Norfuk—a dialect similar to Pitkern—spoken on Pitcairn’s Island.

There’s an art project underway at Assiniboine Parks Conservatory. Helga Jakobsen pins electrodes to plant leaves and then uses a computer program to translate the electrical impulses into sound. She’s monitoring the plants’ reaction to the big change coming in the days ahead. Maybe she’ll hear the Norfuk dialect.


All those beautiful plants—making music and being part of history. It makes me want to slow right down and listen.