I’ve finally finished watching the Netflix series called The Queen’s Gambit. I loved the fifties and sixties sets . . . all that wallpaper and the turquoise. And the clothes!  Then there was the sad, dark underside. I don't want to give away anything. I want to focus on the chess! Yes.

My dad was a serious chess player. He’d have his Sunday-afternoon chess friends come over and they would sit in a silent bubble for hours. My brother and our friends learned to carefully tiptoe around the sanctity of the game.

Curiously, Dad’s chess mates were also former POWs. As a kid, I paid little attention to Dad’s war stories . . . that was my brother’s territory. Talk about airplanes and uniforms would make my eyes roll. In any case, my dad was not one to dwell on the past . . . but I did know that chess helped Dad survive his almost five-year-long sentence in a coal mine outside of Moscow. The camp commander saw in my dad a worthy chess opponent and I’m rather sad that Dad never saw me that way. I played Chinese checkers, instead. Much simpler.  Go here to look at some great images of gulag-made chess pieces.

Anyway, now I’m curious about the role of chess in the Soviet Union and in the gulags. After a quick surf on the web, I’ve found some books to add to my ‘to read’ list.  Stefan Zweig, wrote The Royal Game a novel about chess and madness. Nabokov wrote The Luzhin Defence.

Natan Sharansky survived more than a hundred KGB interrogations using imaginary chess moves. Like other gulag survivors, living in the mind was one way to escape the brutalities of the physical reality. Other chess-playing prisoners somehow managed to carve chess figures out of wood.

So why was chess so popular in the Soviet Union?

Fact: Marx played chess before there was a USSR and then after the Bolshevik revolution in 1917, Lenin loved and encouraged the game.

Fact: Chess was used as a tool to enlighten the proletariat masses. Chess schools instead of bingo halls. Chess was considered an athletic sport.

Fact: Chess could demonstrate to the rest of the world how cultured and advanced the Soviets were. The Soviets were determined to prove that communism was best.

Russia continues with the Soviet chess obsession. It’s cheap and portable . . . doesn’t require an internet connection, or electricity. Just the rules, a board, some wooden figures (or made of anything, really, even breadcrumbs if you're in the gulag) and a teacher.

I’m disappointed that I never got to learn. Turns out only 15% of elite chess players are women. Huh? I was being trained to fold laundry and vacuum when I was a girl.

My kids had chess lessons in elementary school and it's too bad my dad never got to play with them. Teaching chess moves is akin to teaching life skills and I could have used some of those lessons while growing up. Instead I had to learn things the hard way. And some moves, I’m still trying to figure out.

For the record (no pun intended) I didn't listen to just German music as a young person.

“Sometimes change comes at you like a broadside accident.” That’s Joni Mitchell’s line and I consider it my line, too. It’s been 35 years since that December 3rd collision with the Greyhound bus. I wasn’t in the car, but when the police drove me past the crumpled heap that carried my firstborn and my husband, I was too terrified to ask questions.

I spent the rest of that December holding my only slightly injured daughter (car seats work!) while visiting her father in ICU. I still remember the beeps, the smells, and stranger sniffles from another bed over. I remember visiting a mall during those pre-Christmas weeks and feeling like an alien.

For Christmas Day, we got promoted to the Neurology Ward. It was our first Christmas as a family and our daughter was cutting her first tooth at seven months old. Her dad, still alive after surgery and a two-week coma, had a serious brain injury which has haunted my 37-year marriage. I took home a reasonable facsimile of the man I’d married and, I can’t lie, in spite of  hope and positive thinking, it’s been a struggle.

All this about my personal life, just to say that December is complicated for many, if not most, folks. 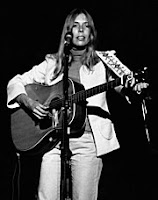 The other day, I heard a podcast interviewing the wonderful Shelagh Rogers, host of the Next Chapter (her weekly program should be required listening for any writer) on CBC. She spoke of her own experience with an accident when she went through a car window. The splinters of glass in her face took years to emerge. That describes my process of dealing with our own traumatic event. The splinters lie there, sometimes for decades, but eventually they surface.

What’s that other Joni Mitchell song? The one about Christmas and about the river? Yes, that one. That fits, too. A snowy river? Sounds perfect.

The family canine insists on three regular-scheduled daily walks and nowadays, by five p.m. it's dark out. Of course, the snow helps to brighten things up and besides, it’s not ever really dark on the streets of suburbia.

Yes, winter solstice is almost here and soon the light will again champion the dark. I take great comfort in the consistent rhythms of the seasons . . . old enough to know that darkness, like light, never lasts. It’s all good.

The Nazis embraced winter solstice and used old pagan symbols to their advantage. I've included this pagan representation of the broken sun wheel. The Nazis had a hard time with Christmas and the birth of the Jewish baby that it celebrated. Most German people loved the holiday and so the Nazis tried to accommodate both Christian and pagan traditions.

Part of my research for my upcoming novel involved interviewing . . . I’d rather call it, sharing a kaffee klatsch . . . with old family friends who grew up during the Nazi years. One particular image from a conversation stayed with me.

A woman showed me a picture she’d drawn, as a young child using crayons, of a swastika rolling up (or is it down?) a hill. It was such a striking image that I had to borrow the idea for a scene in my book. The swastika represents the sun and it rolls up the hill to bring light into the world. Nature, pagan tradition and political propaganda . . . succinctly tied into one child’s drawing. Terrifying. 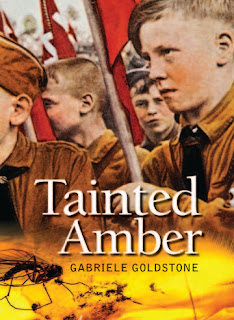 I received an early Christmas present from my publisher—my book has a name and a cover—and I’m absolutely delighted to share. TAINTED AMBER is due for a spring release. The cover—while not exactly what I expected—wonderfully evokes the setting and mood of the story.
The story happens in 1937, it's a time when Hitler's intolerant ambitions still seem benign.
I can’t wait to share this story with readers. Historical fiction inspired by a piece of amber and by my family. Katya’s story continues! It's been a long journey for me as an author. 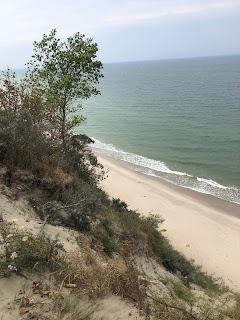 This beautiful beach along the Kaliningrad coast opens the story. I hunted, but never found any amber.

You'll have to read the book to find out if my characters have any better luck finding amber.
at December 11, 2020 No comments:

Back when I was a young university student, I spent a glorious, crazy time in Europe . . . backpacking with my trusty Canadian flag and working whenever I ran out of money. Berchtesgaden became my home base. You might have heard of Berchtesgaden before because Hitler also considered it his home base. Half an hour from Salzburg, Austria, it’s an absolutely beautiful spot and sadly cringe-worthy to think that he enjoyed the same views that I came to love.

When I lived there, signs of the Nazi influence still permeated the town. A hotel manager where I worked actually had a portrait of Hitler on his office wall. Creepy. There were, however, older ghosts lingering in the mountain vales of the Watzmann and Kehlstein—a pre-Christian tradition called Krampus.

On the eve of December 5th, fur and straw-clad mountain creatures descended into the town to beat evil out of unprotected citizens. The noisy, bell-clanging ogres meandered down the main street of the Christmas-card setting lashing whips and chains at innocent bystanders.

I much preferred St. Nicholas. He'd stuff my shoes with oranges, trinkets and chocolates. There was always the possibility that he would leave coal instead of treats and perhaps a cane for my parents to use on me if I didn’t behave in the weeks leading up to Christmas. 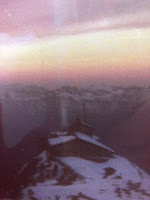 As a poor traveller, I couldn't afford the regular tour bus of the Eagle's Nest.  So I climbed to the top of the Kehlstein and looked down at it. My photo is poor quality but it sure brings back the memories.

I explored Nazi Christmas traditions as background research for my upcoming novel. Hitler’s circle was eager to eradicate Christian traditions and encouraged the pagan rituals—but without much success. One pagan tradition, however, that continues to be embraced worldwide is the Christmas tree. The Nazis preferred to call it the Jul Tree or Tree of Lights.

The pain caused by the Nazis has left many more lingering wounds than the childhood fears of any pagan rituals.