I spent an interesting weekend attending a series of presentations by Mennonite writers at the University of Winnipeg. Entitled ‘Personal Narratives of Place and Displacement.’ I was drawn to it, not because I have Mennonite roots, but because my German Baptist background shares many similarities with the Mennonites. This includes the German language, a Biblical faith and for some of us, the Soviet era. I’m not an active Baptist. I was kicked out of the church back in my late twenties when I was ‘living in sin’ before marriage. Unlike Mennonites, who seem to see their religion as a culture, I no longer consider myself a Baptist.

The discussions around displacement fascinated me. My parents immigrated to Canada in the mid-fifties. Homelessness was central to my mother’s identity. Having a Canadian passport and later, a nice new house, was very important to her sense of self.

Elsie Neufeld’s narrative "Ort und Vertreibung," shared on Saturday afternoon, mirrors much of my own mother’s past. (Her mother was born in 1926, my mom in 1919). It was a hard life these Russian-born women lived during incredibly violent times. A very hard life. It’s a life I keep going back to in my own writing because my mother was shaped by that violent past and she, in turn, influenced me…as I now influence my own family.

I was also moved by another theme that recurred during the talks—born not of a geographical displacement, but a spiritual one. Elsie Neufeld, Di Brandt, Miriam Toews and Rhoda Janzen all talked about the shunning, the judging, the condemning that happens in churches. That’s a displacement that rings true for me with my German Baptist upbringing. I have no interest in returning to my German Baptist roots—I’m relieved to have survived.

I’m not sure if the conversations I witnessed yesterday amongst the Mennonites could happen with a German Baptist group…although I am a tad curious. It’s taken me decades to recover from the narrow-minded religion that raised me. But I admire the Mennonite writers who have the guts to stand back and examine a mindset that destroys individuality by shunning differences. Displacement is more than losing place. Displacement can be about losing self. And the journey to find one’s self can be long and lonely. And empowering.
at October 23, 2017 2 comments:

Radios in the Third Reich

Radios were ubiquitous in the Third Reich. Under Goebbel’s guidance, “Volks-empfänger” or “people’s receivers” were made affordable and became a major propaganda tool. People could sit in their warm kitchens and be brainwashed. Not only that, broadcasting was cheap…much cheaper than producing a movie, like say, Leni Riefenstahl’s “Triumph of the Will.”

Of course, radios didn’t just replay speeches by the Nazi elite. Goebbels was quite aware of the power of music. He filled the airwaves with high-end operas and classical music, peppered liberally with Nazi propaganda.  For Operation Barbarossa—the invasion of the Soviet Union in June, 1941—he commissioned new music to encourage morale in the German people. Attacking Russia meant the war would not be ending soon.

Marching songs were popular because they worked. Songs like Erika have a strong beat and catchy tune. The lyrics are quite innocent…about a young girl named after a flower. But the song will continue to be tainted with the Nazi era.

Another marching song is much less innocent. The lyrics were written by Horst Wessel, a young SA member who was shot by communists in 1930. While he was credited with the musical composition, he probably borrowed the melody from somewhere else.  Goebbels created a martyr out of Wessel and his song became the Nazi anthem. The Horst Wessel Lied has been banned since the end of the war, while many parodies have been written.

There are many German marching songs. A few more examples include:
“Es zittern die morschen Knochen,”  “Sieg Heil, Viktoria,” “Panzerlied,” “SS Marschiert in Feindes Land.” Most have infectious melodies and combative messages. Music is powerful stuff. Hours of tedious marching became an odious type of dance. Every army has its music.  It’s terrifying to realize how beautiful music can become the tool of incredible evil.

I like music for walking…not marching. No uniforms, and no goose-stepping—just an uplifting rhythm to add some pep to my step. And...,I don't even have to do the singing.
at October 12, 2017 No comments:

Propaganda: comes from the word ‘propagate.’ It means to spread information. The Catholic church saw propaganda as one of its duties and created foreign missions.

It didn’t take long for ‘propaganda’ to turn bad…to become a pejorative.  It came to mean, ‘misleading’ information that manipulates its intended audience. Nowadays, we call it ‘fake news.’

I’ve been reading Joseph Goebbels’ war time diaries. Goebbels was a propaganda master during the 30s and 40s. Goebbels monitored what films would be produced, what got cut in those films, what documentary newsreels would be seen at the beginning of those movies, —and when they could be seen. Timing was important.  He controlled what newspapers and magazine were allowed to print, and banned foreign newspapers. He’d even decide on the timing for Hitler’s emotional speeches.

Goebbels was like a conductor and the Third Reich was his orchestra. Of course, the composer behind it all was Hitler, but Goebbels made the Third Reich’s message blare loud and hypnotically for twelve frightening years. Kind of like the Pied Piper of Hamelin.

In this age of the internet and social media, Goebbels—the ultimate control freak—would no doubt be sleeping even less than he did while writing his war diaries. The father of six children had little time for parenting or for sleep while he managed propaganda during the Second World War.

Propaganda is still rampant and we must always scrutinize what we read, watch or hear.
at October 07, 2017 No comments:

Seven things that you might not know about the former Königsberg:

1.     Königsberg means ‘king’s mountain’ in German. This most eastern Prussian city was born in 1255. Known as a muli-cultural hub—it attracted Lithuanian, Polish and Prussian intellectuals. Now, it carries the distinction of being Russia's most western city.

2.     Königsberg’s most famous citizen—philosopher, Immanuel Kant (1724-1804)—is still remembered with a re-cast statue. (The original was destroyed in 1945). He even has a university named after him—Immanuel Kant Baltic Federal University. Kant's beliefs included the idea that peace was possible through democracy and cooperation.

4.     Königsberg was renamed, Kaliningrad, in 1946, to honor one of the original Bolsheviks, Mikhail Kalinin. During the cold war, it became a 'closed' city. No foreigners were allowed to visit. (Another part of mom's life that ceased to exist.)

5. The Kaliningrad Oblast (area) continues to have strategic military interest. With an increased American presence in Poland, the Russians have threatened to make the Kaliningrad area into a nuclear missile zone.

On a lighter note... 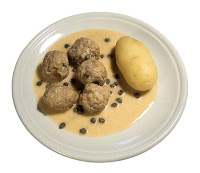 6. Königsberger klopse—a type of meatball cooked in a white sauce. My mom liked to make them but when I was a child, I was a bit leery of the capers hiding inside them. Nowadays, Kaliningrad restaurants serve them to nostalgic tourists. I'd like to go over and verify this. And yes, Kaliningrad welcomes German tourists searching for family memories.

7.  Kaliningrad is one of the venues for the 2018 Fifa World Cup. Can't wait. I wonder if Chancellor Merkel and Putin will be sitting together and watching those games (like they did in Brazil).
at October 01, 2017 No comments: