This past week there were news images of the dismantling of the friendship monument in Kyiv. A symbol to peace can’t stand strong when bullets mock its existence. Although I saw many monuments and statues during my travels over there, I don't remember this one and now, I guess it's too late.I find it hard to believe that this monument even existed. After all, it’s not the first time that Mother Russia tried to destroy Ukraine. The Holodomor, a deliberate starving of Ukrainians back in the early thirties, proved that Russia had only contempt for its ‘friend’.

A quick google, and I found other monuments supposedly dedicated to friendship but that only sneer at its meaning. North Korea and China have the Sino-Korean Friendship Bridge. No pedestrians allowed.

The Friendship Park between California and Mexico has in recent years morphed from being a picnic area to being controlled by U.S. Border Patrol watch.

Close to home, we have an International Peace Garden between Manitoba and North Dakota. Canada has the longest undefended border in the world. Too bad such a border cannot be taken for granted. Too bad that broken friendships can endanger so many lives.

Friendships can evolve. There was a poem I learned as a child, “Make new friends, but keep the old. One is silver and the other gold.” (by Joseph Parry) Built on trust, friendships are fragile things that need more than symbolism to flourish.  Ukraine now has new friends and I’m proud of my country for being one of them.

Without friends, I truly don't know where I would be. Can't choose your relatives, but friends are precious, indeed. Real friends don't need monuments, they just need a warm human hand. 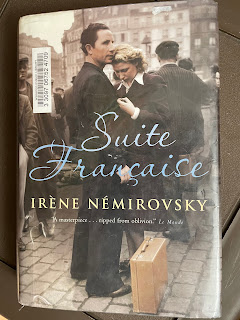 Discovering Suite Française by Irène Némirovsky was such a gift. I don’t remember how I became aware of this book, but there was no waiting line for this 2006 edition (Sandra Smith, translator) at the library. I was immediately pulled into the narrative which coincided with the narrative of the events in Ukraine. People on the road—walking, driving, hurrying along, carrying what they could. Not sure when, or if, they’d go home again.  Air raid sirens in the background. No, not near Kyiv, but near Paris. Not late February, 2022, but early June, 1940.

If the setting wasn’t enough, then the exquisite prose kept my eyes on the page and in my mind’s eyes I saw the beauty of the French countryside juxtaposed against the ugliness of war.

But it wasn’t the setting, the prose, or the perceptively-drawn characters that held my attention to the very end. . . that made me read with careful deliberation. It wasn’t even the narrative—of love, hate, insecurity and surrender—between conquerors and the conquered, between rich and poor, between family members and couples—that kept my reading slow and intent.

No, it was the story behind the story that continues to reverberate within me. Irène Némirovsky died in Auschwitz in the summer of 1942 and this novel, Suite Française, was unfinished. The appendix shares her notes and plans to make the 300-page manuscript into a 1000-page tome. The appendix also shares letters written on her behalf to rescue her from the Nazi clutches.

Born in Kiev (Kyiv) in 1903, Némirovsky had a lonely—although lavish—childhood. She spent much of it in Moscow and St. Petersburg, fleeing after the 1917 Revolution, and ended up in France. Her literary success came early with the release of David Golder in 1929 and made into a hit movie in 1931. She was abruptly arrested in July, 1942 and died soon after. Her husband tried to help find her but also died in a camp later that year. Their two young daughters survived only through the help of friends.

The inscription in the 2006 translation by Sandra Smith, written by the surviving daughter, Denise Epstein, reads: 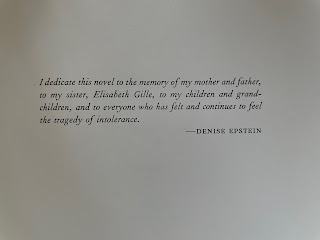 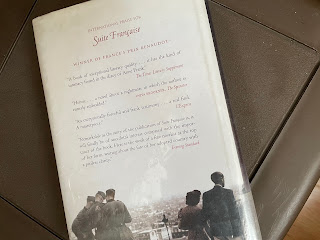 The tragedy of intolerance continues to stalk our times. But secrets lose their power in the light and books like this shine light.

There's another, older and deeper, reason this book resonated with me. As a child, my dad once shared memories of being a Luftwaffe officer in occupied France. I don't remember where, but it was a happy memory for him of a place with endless bottles of cognac and burgundy. I was just a kid and the memory's dim. Yet, this novel highlighted that dinner conversation from my childhood.  What ominous times.

It’s rather claustrophobic when you’re inside a Winnipeg spring blizzard. The cat, dog and I stare out the window at the fresh white stuff falling on top of the dirty remains of last November’s first snow and . . . and what? After a long, cold, pandemic winter, now slip-sliding through an April blizzard and a deepening war, bad-news stress is a real thing. Here's a link. 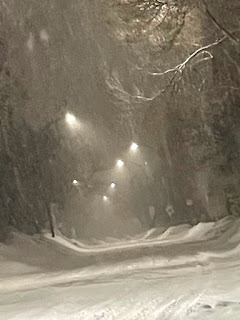 We can’t change the weather. All our wishing and hoping and rationalizing will not change the weather one iota. So the cat arches his back, does a three sixty in his favourite spot, kneads himself comfy, and goes back to hibernation mode.

Meanwhile, the dog and I will do our twice daily rounds, using the street, not the snowed-in sidewalks and we’ll notice, like we always do, that walking in a storm is not as bad as it looks. In fact, it’s rather fun. Back inside, we’ll hunker down in the cozy warmth of home with renewed appreciation. 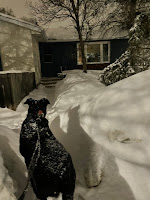 But there’s another claustrophobia bearing down on me. This one has nothing to do with the weather or the pandemic. It’s the war news. It’s one thing to research past wars and to step into past lives and write about them. But there’s something mentally oppressive to also hear about a current war happening in the zone of my historical and fictional interest. 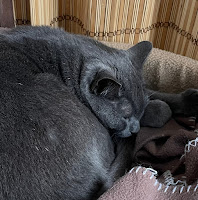 Do I do what the cat does and shut it out or do I follow the dog into the conflict? Of course, an old woman like me would be useless in a war zone and my meager dollars are but a drop in the bucket of humanitarian need. But I can’t follow the cat’s lead. I can’t just grow tired of it and go back to sleep until it’s over.

I’m fortunate to have connections to both the Ukrainian and Russian side. Stepping into their boots, if only for a few minutes, reminds me that this war is not just headline news. Like me and my two pets, the people caught in this conflict zone also yearn for spring and new growth.

I have faith that spring will come. If only I could apply that same faith towards peace in Eastern Europe. While I keep the shovel handy and wear waterproof boots, others stockpile weapons and ammunition. 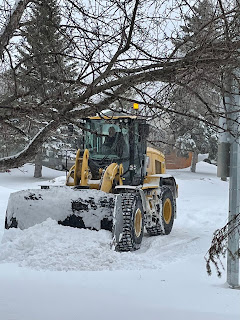 The growling snow plough, barging down my street, is not a Russian tank and I will not complain about this Easter’s blizzard. No! Nyet! Ni!

Staying informed, trying to understand & reaching out beats curling up and tuning out. Sorry, cat. I'm with the dog on this one.

Thrilled to see that my web  page at Shepherd for Authors is live.

Marketing is such a tough area for me (I would rather hide somewhere with a book near my nose than try and actually sell a book). Therefore, I'm grateful to connect with others interested in 20th century history under Stalin and Hitler.

I appreciate the great idea behind this resource which is to connect with readers and recommend my favourite books on my areas of interest.

Check it out!  Here is the URL:


My dad died, today, 29 years ago and I think of him often. Growing up with a father who’d been in the Luftwaffe (he joined in 1936), made me sensitive to the issue of being “the bad guy.” Because I knew my dad loved me and that he was a good person in spite of his previous uniform and war history, I’ve always been curious about what makes evil succeed.  Dad was a smart guy, after all. How did he get sucked into the Nazi cause?

Here's what I've come up with:

One huge ingredient necessary to grow evil is ignorance. This is happening in Russia right now where the mass media manipulates the truth leaving the average Russia in the dark. Goebbels was a mastermind of propaganda during the Third Reich. He controlled newspapers, radio, and film. It’s harder now with the internet so prevalent, but Putin is making every effort to control that, too.

For those who can’t be brainwashed, there’s evil’s second enabling tool . . . fear. Russian protesters are in jail, dead, jobless or leaving the country. Nazis had their concentration camps and even beheaded young people for printing flyers encouraging resisters. (see Red Orchestra and White Rose).

Ignorance and fear can be fought with knowledge and with courage. My dad was a voracious reader after the war and I have a solid collection of his books. He worked at re-educating himself. He was also a courageous man, forging a new life in a new country and bravely admitting to his past. Today, it's Ukraine's president who models courage to his people and to the rest of us.

My dad paid for his youthful ignorance with the loss of his young family, five years in a Soviet gulag and most of all, a deep sense of shame for his    cheerleading of the Führer.  But he was open to learn and he was brave to admit when he was wrong.

My dad was a humble man . . . a broken man. Maybe that’s what I loved most about him . . . his humanity.  What is that Japanese art using broken pieces called?  Kintsugi.  It makes broken things more beautiful than they were before.
Rest in peace, Dad. Peace to our world, too.
at April 07, 2022 No comments: