I've just finished reading Tom Rob Smith's book Child 44 (debut/adult fiction). By coincidence it pairs well with remembering the holodomor. I think it's going to get my favorite (adult) book of 2008 award.
It starts off with a horrible incident during the 32/33 holodomor when the main character is a child, and then leaps ahead twenty years to the early fifties - up until the time that Stalin dies in March of 1953.
I'll just say the obvious. What happens in childhood shapes you into an adult. And I'd like to think that children authors can have an impact in that development. Reading a book is not just a trip in the mind, books can also become friends, mentors, and help us to understand our enemies. Wow! Books are amazing, aren't they?
at November 29, 2008 2 comments:

Email ThisBlogThis!Share to TwitterShare to FacebookShare to Pinterest
Labels: Child 44 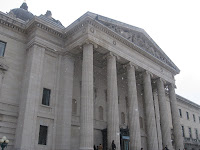 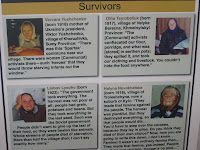 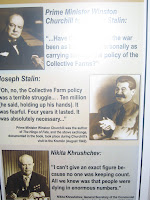 Stalin admits to ten million deaths because of his collective farm initiative. My mom narrowly avoided death during collectivization, and then because of my grandfather's selflessness, she avoided the famine by being adopted out and leaving USSR in January, 1932 - one season before the holodomor set in.
(My photo taking skills can only get better - I hope. Clicking on photos should enlarge them.)
My grandfather stayed behind and survived the famine. Of course, in the end, Stalin got him during the mass shootings of the 1937 Great Terror.
I also got to watch a Ukrainian-made movie, Famine-33 by Oles Yanchuk, based on a book called The Yellow Prince. It was a very sad film. Slow, painful, and bleak.
at November 22, 2008 1 comment:

There's an article in yesterday's local paper about a week of commemoration for the Holodomor victims. I pointed it out to my family. "What's the holodomor?" they asked.  And I realized that so much still needs to be said about Stalin's atrocities. Everybody knows about Hitler and the holocaust.
Here's a few facts about the holodomor:
1. The word holodomor comes from two words meaning hunger and death or plague.
2. The time is 1932/33
3. The place is most of the grain-producing areas of the Soviet Union - Ukraine is especially hard hit.
4. The victims were six to seven million people who may have died during this man-made famine.
5. The aftermath: the famine was not talked about until 1991 when Ukraine finally achieved independence. Why? Because people were too afraid. Too afraid that somehow they'd get into trouble for doubting the goodness of the Soviet state.
Starvation appears to be such an easy concept to understand. But what is it really like to starve to death? What is it like to be a mother who can't feed her own children?
See this link for a ceremony earlier this year, commemorating the 75th anniversary of the  Holodomor  out in Toronto. My city of Winnipeg has a very large Ukrainian population, so I  expect tomorrow's ceremony to be well attended.
p.s. My own family - although my grandfather, grandmother, mother and her siblings were all born in what is present-day Ukraine - considered themselves Germans. Stalin did not differentiate between Ukrainians and Germans. To him they were kulaks - an economic, and not ethnic, distinction. I realize that this can be a contentious issue.  Let's use 'humanity' as the common link to all suffering.
at November 15, 2008 1 comment:

Email ThisBlogThis!Share to TwitterShare to FacebookShare to Pinterest
Labels: holodomor

Went to see the movie Passchendaele last night. A made-in-Canada movie by Paul Gross about a small area of Belgium in 1917. It's a somber reminder that war might appear to be about 'big' things like freedom and nations, but it's mostly about 'little' things, like dry matches and little brothers, and relationships that never got past first kisses. My grandfather would have been fighting for the 'huns' in that war. Injured and bed-ridden,  he later committed suicide. Yup, that war never ended for some.
The day before, my daughter interviewed my mom for a college assignment about Remembrance Day. I suggested she focus on the civilian war experience.  My mom, at age 21, was forced to work in a munitions factory until the Soviet tanks were just down the road in February, 1945. Then she was taken as a POW to work in the coal mines of Ural. She asked if she was allowed to write letters home. No.  First there was no home left, and second they had no paper or pens. But what was etched into my heart, was my mom saying that she wrote in her mind, to God. And then she closed her eyes and recited a poem-like prayer that she told God.
Remembrance Day. It's not just about the soldiers. It's about people.
at November 11, 2008 1 comment:

I'd never have connected to my mom's Soviet-era roots if it hadn't been for Don Miller. When I first began the search for a village called Federofka, it was Don Miller who guided me to that sad place. (A comparison can be made to some of our First Nation reserves over here.)
Don Miller leads the Samaritan Ministries In Ukraine. He's been incredibly active not only in researching the history of the German Baptists in the Volhynia, but also in helping the broken spirits over there.
He's helping them by providing them with the tools to help themselves. But some are so old (widows like my mom) that they can no longer help themselves. Here in Canada, we have an amazing health care system and families who are still intact. Many families over there were broken by the gulag, by war, and by alcoholism. With the Soviet state gone, there's little for the survivors of the Stalin era. When I was there in '04 the poor old women were selling flowers or a couple of chicken eggs on the street, or else sweeping the streets - trying to get some coins to supplement their paltry state pensions.
Don Miller has built (literally, I might add) a house for the widows. It's near Zhitomir - in Pulin - and has beautiful rooms and a community center. What we take for granted: heat, plumbing, food - will now be available to these lonely old women who have seen and lost so much.
I'm in awe of D.M.'s passion, dedication and perseverence in this project.
at November 08, 2008 2 comments:

The Book that Kit Built
That was the name of Kit Pearson's talk in Toronto on Saturday. Sadly, I have no photos; so here's my photo in words: A slender woman, wearing a blue sweater with a white turtleneck, and whitish colored hair.  The presenter used these adjectives to describe her: honest, compassionate and beguiling. Kit said, that to be a children's writer you have to remember the emotions of your own childhood, and not see childhood through another child's eyes.
Here's a few other things Kit said.  There's no right or wrong way to build a book, but you have to start somewhere and often using a 'manual' of some kind helps.  Then you adapt this method to make it your own.  Kit described herself as a 'fence-builder' with posts put in first, and then board by board the rest is put up, with gaps here and there to be filled. I love that image!
Her best advice came at the end.  Writing the book must be an emotional experience that changes the writer, and also, the reader. False emotions equal sentimentality. The more powerful the emotion, the less you should write about it. She quotes E.B. White from "Charlotte's Web."  He writes, "Nobody was with her when she died."
Kit suggested that the theme of her books, looking back over her career, is about how children are victims of an adult society.
Her newest book is "The Perfect Gentle Knight" and it's based on a childhood situation from the 50s. Must read!
at November 02, 2008 3 comments: