Yes! Grateful for a 5 star review from CM Review (Canadian Materials). Hope this will encourage readers to pick up a copy
of both Tainted Amber and Crow Stone. Understanding history helps us to understand the present global conflicts.
I’ve blogged a lot about East Prussia, the eastern-most province of the former Third Reich that became Russia’s most western enclave. At about 15000 square kilometers, it’s a third of the size of Prince Edward Island. For more than seven decades it’s been not much more than a ghost town … de-populated of Germans, re-populated by transplanted Russians (a man from Kazakhstan lived in my uncle’s former house) and dotted with the ruins of war.  Today, as Putin rages about how German tanks are again confronting Russian ones, this area is a stark reminder that the conflicts of the past are not resolved.Pillau—on the Vistula Lagoon—was once the desired Baltic port of refuge for civilian refugees like my mom. The Russians renamed it Baltiysk.
As a Russian naval base, it’s in a restricted zone and shares (along with the capital city of Kaliningrad) the only year-round ice-free port on the Baltic available to the Russian military. Even when cycling near Baltiysk, along the beautiful, sandy Amber Coast, we could feel the ground rumbling and hear the dull explosions from military exercises.

Kaliningrad Oblast is surrounded by NATO countries… Lithuania to the north and Poland to the south and east. However, there’s a 65- kilometer-long border near the Polish town of Suwalki that makes the Baltic countries’ vulnerable. This short border is all that separates the three NATO countries of Lithuania, Latvia and Estonia from Belarus, Russia’s ally. I expect that we’ll hear more of these three places: Baltiysk, the Suwalki Gap, and Grodno (the closest Belarusian city) in the coming months. Will Kaliningrad/East Prussia ever heal?

The inscription on this stone reads: "One hardly can find any personal tomb. Together all fates here're joined."  (Yantarny, Kaliningrad Oblast, Russia).

The Greeks thought amber was solidified sunshine, but back in January, 1945, the Amber Coast along the icy Baltic offered no warmth to thousands of emaciated women and children.

10,000 Jewish women and children, former prisoners of the Stutthof concentration camp near Danzig (now Gdańsk) were forced to march in the bitter cold northwards towards the town of Palmnicken (Now Yantarny).

Only 3000 made it. They were to be stuffed into the “Anna” shaft, an unused shaft in the Palmnicken amber mine. But when the desperate SS had to change their plans as the Red Army came closer and closer, the Nazis forced the surviving prisoners into the Baltic Sea. Why waste ammunition when the sea could kill for them?

13 survived to tell their stories.

On this Holocaust Remembrance Day, I want to remember the power of story. It is our responsibility to remember and to share. When I explored the Yantarny coastline, it was warm, sunny and beautiful. Did the ghosts of those 2987 who were murdered still haunt the area? Perhaps. But it could only be sensed by those who knew the story. We need the stories!

Nearby, the amber museum was filled with history and beautiful art and the fossilized pine resin gleamed like gold.

For German readers, I recommend, Der Junge von her Bernsteinküste, a memoir by Martin Bergau.

Nancy Drew—an American detective successfully marketed to young girls—has had a universal appeal. Not only has she sustained popularity over the decades, but also in other countries. However, names matter.  Nancy's name morphed to fit in with her readers.  Visit this webpage for some fascinating facts behind the international publications (or keep reading my post for the highlights). 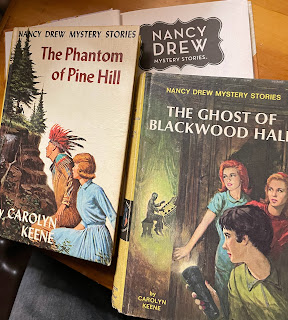 In Denmark, Nancy is Nancy, but George is Georgia.

The French call her Alice.

Never mind the names, what mattered was Nancy’s personality and that seems consistent throughout the earlier Grosset and Dunlop series released between 1962 and 1968 (#1-45) that I grew up reading.

By the end of the first chapter of “The Ghost of Blackwood Hall” (#25)—the book I’m currently re-reading—Nancy’s outstanding character traits have been revealed. She’s shown as funny, kind, diplomatic, and displaying her father’s ‘courage and keen intelligence’. She’s also described as curious and as a risk-taker.

Why do I care so much about Nancy Drew? She's been a shadowy star of a novel I'm working on and I like to read what my protagonists read. There's an even closer connection, as you might guess.

Growing up, I pretended to see her in my own mirror, hiding behind my immigrant name and awkward family. I wanted to be Nancy … clever, pretty, funny, kind, and curious. I’ll settle for curious. That's one trait Nancy, the cat and I all share along with the various risks that go with it. Nine lives, please!

Growing up in the sixties here in Canada, Nancy inspired many girls and I bet my uncomfortable immigrant experience is still experienced by modern-day refugees and newcomers. Getting lost in a book was a great way to explore the world and Nancy Drew was the magic mirror that transformed my childhood.

Now, as an adult and as an author myself, I'm curious about Carolyn Keene, the author name on all these hundreds of Nancy Drew books. That's a mystery I've yet to solve. So I guess I'll have to be a sleuth and post on this topic once again.

Grateful to readers who put Crow Stone #1 on the Teen BestSeller list this week at McNally Robinson! Tainted Amber got included, too, at #5!  Thank you!

Having experienced — through the researching and writing of my most recent book— some very dark times—and considering the current state of world politics—I’m needing some light reading. 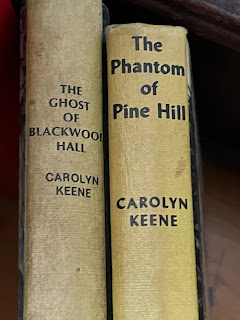 Guess where I’m finding it? In my old role model … the invincible Nancy Drew. I only wish I had her roadster to zoom away in. But truly, if certain smells and foods can you remind you of faraway or exotic places, so can books. The never-ending series of Carolyn Keene’s Nancy Drew mysteries offered me escape from the challenges of childhood. With Nancy Drew as my role-model, uncovering secrets became a call to adventure. 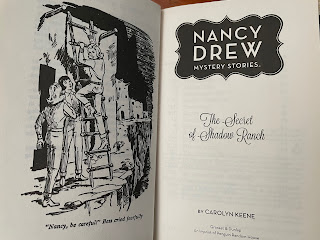 I’m not sure how this re-reading of my childhood favourite series will go. Perhaps it’s best not to disturb the memory. Perhaps the intrepid Nancy Drew will crumble to dust under my 2023 gaze.

Perhaps she should stay in the sixties, a childhood memory that haunts and inspires me to embrace mystery, to be independent and stubborn, and to sometimes drive a bit too fast.  But there’s only one way to find out.

A Load of Guilt 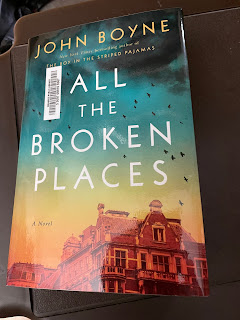 John Boyne’s newest release is for adults. All the Broken Places follows up on The Boy in the Striped Pajamas, released as YA in 2006.   It’s a complicated exploration about the guilt of Second World War bystanders (not perpetrators). Families broken apart by the Holocaust might see this novel as manipulative, because—like most novels—the reader develops understanding and empathy towards its protagonist. In this case, it’s Gretel, the daughter of a Nazi concentration camp commander and the older sister of Bruno, the protagonist of the earlier novel.

The novel alternates between past and present. Burdened by her father’s war crimes, Gretel’s condemned to a life of isolation and fear. A finely crafted book, nuanced and layered, it’s a true page-turner. My only criticism would be of David, one of Gretel’s love interests, who struck me as weak and undeveloped.

The poignant opening line bears repeating. “If every man is guilty of all the good he did not do, as Voltaire suggested, then I have spent a lifetime convincing myself that I am innocent of all the bad.” (p. 3)   Who wouldn't love to craft such an opening line? 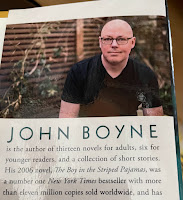 We can’t choose our families, we can’t change our past. Guilt is a fascinating topic to explore and one I examine through my own writing. War novels offer much opportunity to explore the weight of regret, of guilt and of shame.

Katya, fictional protagonist of my books, carries a heavy load of guilt throughout her life.  Guilt separates people from each other and that isolation then feeds the guilt. Through books, through the art of fiction, that powerful barrier can melt as people connect and empathize.

In one scene, Boyne’s character, 91-year-old Gretel, converses with nine-year-old Henry of contemporary London. Gretel tells the  avid young reader about the Nazi book burnings of the 1930s. “Why would anyone ban a book?”  he asks, and she replies, “Bad people. … They were afraid of them, you see. Frightened of ideas. Frightened of the truth.” (p. 359).

Books are powerful.  Some people call novels ‘brotloße Kunst!’ (breadless art).  But they’re wrong, books are the bread that feeds our minds.

To get myself into the spirit of my upcoming book launch (Friday, January 13th, at McNally Robinson's, Grant Park and online), I’ve been listening to some music that inspired me while I researched and wrote Crow Stone. After all, next to the sense of smell and the taste of food, what can be more memorable than a little music? At the bottom of this post, I’ve including links to some evocative, war-inspired songs that the characters in Crow Stone might have been familiar with.

Propaganda, whether through music, film, print, youth groups or schools, saturated German society under the Nazis. As the war faltered, the propaganda machine grew louder and more ubiquitous trying to bolster morale.  As Putin is currently discovering, an army with low morale is a losing army.

Why does music have such power? Perhaps it’s for the same reason why good fiction has power. It's about emotion. It’s through the lens of emotion that we experience our world.

Which reminds me, I’ve got a new word to guide me through 2023. It’s gratitude. Is gratitude an emotion? I know that it’s a lens that lets me see the world with hope and with positivity.

Perhaps you might enjoy the music with me as I share my re-living, re-telling, re-visioning of the hell experienced in 1945 throughout parts of eastern Europe.  Seen through the lens of the doomed women and children inside the imploding Third Reich, it was a time when the propaganda of music made a mockery of the very lives it was trying to control.

There's a bit of Christmas music scattered throughout the book, too. It's a great irony that a culture that birthed the Second World War with its brutal atrocities, also birthed Silent Night and other beautiful Christmas songs.  But who wants to hear Christmas music in January?  Suffice it to say that Hitler and Silent Night were born in the shadows of the same Austrian mountains.