It's a great time of year - the in between time - and the weather outside is totally perfect for wandering imaginations. To set the mood, one must listen to Hawksley Workman's song, Autumn's Here. Then add: grey sky, some fog, and a wind whipping dead leaves around. I love it!
Here's a link to a tour of Winnipeg's haunted spots. Yes, we have our ghosts here. Do I believe in ghosts? I've met a few, so I guess that makes me a believer. I brushed shoulders with my grandfather in Zhitomir while I was there. Okay, it might have been the wind, I admit, bumping into me while I turned that corner to the archives building. Wind is just one of nature's most amazing things - it's invisible, yet so powerful. Without wind, everything would stay the same.
Have yourself an imaginative Halloween!
at October 31, 2009 No comments:

Finished off my copy-edits yesterday (hurrah!!) and played the bit part of a harried/hurried mom in my daughter's college film project. Plus the day job. So today I can do the off-stage harried mom bit - laundry, scrounge for food, walk the ignored canine, pet the ignored other pet (poor kitty) and scream at all the clutter that grows in bathrooms and hallways. Why do girls have to try on three or four different outfits before they leave the house?
As to my movie debut? Umm, I think I'll stick to writing and reading.
at October 28, 2009 No comments:

Email ThisBlogThis!Share to TwitterShare to FacebookShare to Pinterest
Labels: moving on

My mother and her siblings, along with my grandmother, were exiled to a place called Yaya in Siberia. It's a bit southeast of Tomsk and off the beaten track. Thanks to google, I've more interesting information about this journey. It's about 3000 kilometers from Moscow to Yaya. Gas costing $1.29 a liter (or $4.89 a gallon) means a round trip would cost about $750.00 dollars - and we definitely would want to make this a round trip. But in 1930 they would have left from Zhytomyr, which adds another thousand kilometers to the trip. So a round trip from Zhytomyr ... would cost about $1000.00 dollars in gas money. Still probably cheaper than the train. Wouldn't that be a cross-country adventure?
Of course, back in 1930, the trip into exile was courtesy of the government. A slow, unheated freight train ride to the middle of nowhere at the beginning of winter. Plus, it was a one-way trip for my grandmother.
My grandmother was hoping that they'd be dumped in Irkursk on Lake Baikal because that was where other family members had been sent. It would have added another thousand kilometers. Yaya, was only supposed to be a transition camp - a place to spend the winter. Irkursk seems less desolate than Yaya. Today, it's quite the tourist destination - because of it's proximity to Lake Baikal, no doubt. So if I went, that would a good place in which to headquarter.
Someday.
at October 25, 2009 No comments:

Email ThisBlogThis!Share to TwitterShare to FacebookShare to Pinterest
Labels: Yaya

Do other authors go through this? I'm totally de-flated, dis-couraged, and de-layed.
New release date: November 24.
at October 24, 2009 2 comments:

Email ThisBlogThis!Share to TwitterShare to FacebookShare to Pinterest
Labels: deflated

Someday when I'm rich and famous (or old and lonely) I'm going to have my very own laptop and I'm not going to share. Does anyone else have these issues? Back in the old days I could write whenever the 'muse' hit me. Now, I write when my favorite teenager is working, still sleeping, or at school.
I guess I could exercise the muse with the old pen and notebook. Some tools will never go out of style.
at October 23, 2009 No comments:

Stalin-era research seen as a threat in Russia

http://news.bbc.co.uk/2/hi/europe/8311335.stm
If you click the above you'll see why something as innocent (but truthful) as my children's novel might not have a chance in the very country it's set in. The FSB (ex-KGB, ex-OGPU) in action.
Back to work to tomorrow and my internet time will dwindle. This could be a good thing. Computers suck time like ... like vacuums suck dirt. Or... better analogy anyone?
at October 19, 2009 No comments:

Names of people changed, too!

Today when I was checking on addresses (that I'd come across when I'd perused the former communist archives in Zhitomir), I realized that names, too, had changed over in the old country. In the archives I'd found several letters. In one, my mother's Aunt Olga wrote to the officials back in 1958 (after Krushev's de-Stalinization) asking for information about her missing husband - my grandfather's brother, Gustav. Her last name had morphed from Ristau to Ristovaya.
So as much as I'd love to send my upcoming book to extended family, I realize I don't know names, places, or the alphabet and language. But having gotten this far, I still hope that somehow I'll make a connection.
I got side-tracked and checked out some travel costs for visiting the wilds of Siberia. Wow. Very expensive. I was lucky just to get to Ukraine.
at October 18, 2009 1 comment:

Before I forget, I wanted to mention that not just places got their names changed in the old USSR. The secret police, who managed to creep into everyone's life, also had name changes. In my book - which happens between 1929 and 1931 - they're called the OGPU. By 1934, they morphed into the NKVD. (And before being called the OGPU - they were just the GPU.)
The NKVD became the NKGB in 1941, the MGB in 1946, and then divided into 2 groups in 1954. The KGB was in charge of espionage, while the MVD was the secret police.
Oh, and today Russia's secret police are called the FSB.
So many initials. Boggles the mind. But when that knock came on the door, and the vehicle was waiting, it all boiled down to the same loss of freedom and of human rights ... interrogation and either death or the GULAG. (Those initials stood for: Glavnoe upravlenie lagerei - Main Camp Administration).
at October 16, 2009 No comments:

Must mention that my book release date has changed. It's now November 9 - 2009 (At least it's still coming out this year.) So I've changed my launch date from November 18th to December 8th. Still at McNally Robinson Bookstore - Grant Park location. My biggest fear is that nobody will come - so if you're in the area - please visit. Fingers crossed that there'll be no snowstorm and that the book will have actually made it, too.
at October 11, 2009 4 comments:

One of the first things God did after creating us humans (according to the Genesis story) was order Adam and Eve to name the animals. It appears that naming things is what we people do. We create and then we label.
Over in Russia they not only name, but they re-name, and then re-name again. Names were changed after the 1917 October Revolution, with the rise and fall of various Soviet officials, after the victory of WWII, after Stalin's death (when Kruschev came to power) and then again more recently in the 1990s after the USSR's collapse. Here's a few examples of this confusion.
St. Petersburg (on the Baltic Sea) was once Leningrad (renamed when Lenin died 1n 1924 until the year of the USSR's death in 1991). From 1914 until 1924 it was Petrograd.
Volgograd was once Stalingrad (1925-1961) and before that it was Tsaritsyn. It's on the western side of the Volga River. There's still discussion about renaming it Stalingrad.
Kaliningrad. (Also on the Baltic Sea) This Russian city was once called Koenigsberg (...til Feb., 1945 when it was heavily bombed). See this youtube link.
Slavskoye. (This was once Kreuzburg - and close to Koenigsberg). My mom spent her teenage years here. In those days it was part of East Prussia - a country that's been renamed and today is part of the Russian Federation.
Kaliniwka (35 kilometers northwest of Zhytomyr) used to be Federofka - my mom's birthplace. Today it's a tiny, sad place - with no links on the internet, except for Don Miller's.
Then there were cities like Tomsk 7 (now Seversk) that didn't even exist on maps because they were considered 'secret' cities.
So you can see how an old person, with an already sketchy memory, can get totally messed up and how the next generation (people like me) can scratch their heads and wonder where these places are and if those old memories can be trusted.
Not only that, the current government in Russia is trying to control history so that Stalin has a positive image. This mass manipulation is happening right now. It's totally frightening.
Follow up with these links:
- list of re-named places in Russia
- blog about current re-visioning of Stalin
at October 10, 2009 No comments:

Email ThisBlogThis!Share to TwitterShare to FacebookShare to Pinterest
Labels: re-naming

One of the books I got while at the conference was Nettie's Journey (by Adele Dueck, Coteau Books). This book is set about a decade earlier than mine and tells the story of the chaos after the Russian Revolution. The story centers around a Mennonite family in an area south of Kiev who later immigrates to Saskatchewan in the 1920s. (My own book focuses on a Lutheran/Baptist family in an area known as Volhynia west of Kiev.)
Anyway, while reading this very interesting book last week, something surreal happened. The character, Nettie, is eating tweiback (a Mennonite food described in the book's handy-dandy glossary as two buns baked on top of each other) when my daughter's friend shows up and offers me a gift from her Mennonite grandmother ... tweiback. I couldn't believe the coincidence. Hers were wrapped in the middle with beet leaves. They tasted totally delicious and I shared some at the nursing home.
I wonder if Adele offered tweiback at her book launch? I'm re-reading my book now trying to decide what to offer at my own. Linden blossom tea, perhaps?
Sandra Birdsell's book Der Russlaender also talks about the violent chaos in the Russian countryside after the October Revolution. When I first read that book I thought that was my mom's story, I mean ... really... how many Germans were there in Russia? Turns out there were many. Different groups came at different times and settled in different areas. They also immigrated to North America at different times. My mother's group stayed behind and got caught in the Stalin terrors.
More recent groups left in the nineties after the USSR collapsed. I don't suppose there's too many left now. But I should check on that.
at October 04, 2009 4 comments:

Email ThisBlogThis!Share to TwitterShare to FacebookShare to Pinterest
Labels: Tweiback 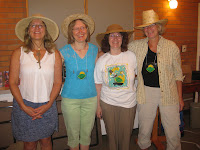 Last post about Prairie Horizons. Just have to share the photo with our hats (As conference facilitators we were the head gardeners :)) From left to right, Joss Meyeres, Sharon Plumb-Hamilton, Marie Mendenhall, and me.
It was a two-year online relationship and meeting again at the conference after months of sometimes frantic emailing was a great way to end this 'conference planning learning experience.' Would I do it again? Probably not. Am I glad I volunteered? Most definitely.
My only regret was that I didn't have a book to bring along. But soon... fingers crossed, I hope. October 20th is the official release date of The Kulak's Daughter, and publisher seems confident that will happen. (We shall see.)
at October 03, 2009 No comments: