The stores, during these last days of December, are filled with shoppers looking for bargains during  'liquidation sales.'

Russia has a different take on 'liquidation.' Back on December 27, 1929, the Soviet government, under Stalin, passed the resolution to ‘liquidate the kulaks’ as a class.

On December 29, 2021, the Russian government, under Putin, passed another liquidation law ... the resolution to liquidate Memorial, the human rights organization focused on victims of political repression.

It took me twenty years to figure out my family history, repressed as it was under the Soviet regime. Finding it, proving it, left me feeling sad but started a healing process.  93 years after my mom’s family was broken apart, after the family’s windmill was lost; almost 70 years after my grandfather was killed, I'd found him. I'd found my family. But now the modern Russian government has rescinded that tragic past. Now it's illegal for people to remember their own history.

This year, 2022, Putin has a new set of liquidation laws. While still waiting for the final stamp of approval, new laws passed a first reading December 20, 2022, against ‘sabotage propaganda’. This is open to interpretation, but ‘liking’ an anti-Russian, pro-Ukrainian Instagram post could now be considered ‘sabotage’ with a prison sentence of 20 years or more. Putin’s about to ‘liquidate’ anyone. Just like ‘kulak’ became a convenient label for anyone seen as different; modern Russia targets internal threats with labels and laws.

“The punishment for saboteurs will be as severe as possible,” said State Duma Chairman Vyacheslav Volodin, a member of Russia’s ruling United Russia party. (Moscow Times)

I’m afraid for a Russian friend of mine. Perhaps it’s best that we don’t connect. Our friendship could be her downfall.  Our children’s book project about cuckoos and storks might somehow be seen as subversive.  I wish I was joking.

Subvert: to destroy or damage 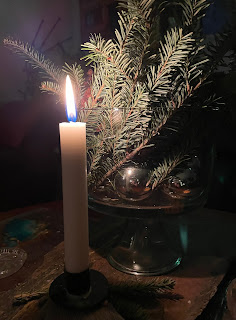 I received an invitation to attend a winter solstice celebration with a recent Iranian immigrant (a former student of mine in the language program for which I volunteer).  It was an invitation I couldn’t turn down.

Yalda night with the Iranian diaspora of Winnipeg this year should have been a joyous occasion. After all, Yalda is about light regaining its strength after the longest night. After two years of Covid, people were no doubt looking forward to reconnecting. But instead of reconnecting via the red of juicy pomegranate and watermelon—traditional food served for Yalda night—the only red was blood on the images of the executed or shot during the last 96 days of the new Iranian revolution. Images on large screens showed the faces of victims of this government crackdown on protesters.
“Woman, life, freedom,” accompanied all the portraits.

While it was not a night of celebration, it was a night of empowerment through music, poetry and speeches. Various local politicians shared their support for this new Iranian revolution, as well. City councillor, Janice Lukes’ words stayed with me: “You are the light,” she told the attendees. And I think that’s the message we all need to know and to act on. Whatever our situation, we need to be the light. Was it a Chinese proverb that says, “many hands make light work”? Well, our world needs many hands.

The days are getting longer now. The light will prevail. 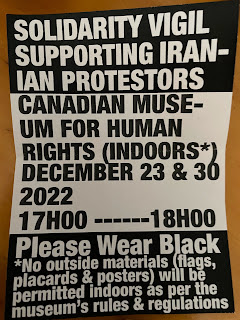 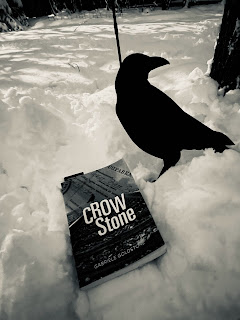 You know how it is when you have something, you're suddenly aware of it everywhere—like grey cats, say, or red cars ... or novels with ‘crow’ in the title.
I’ve discovered that the title Crow Stone belongs to a successful thriller released back in 2007 by Jenni Mills. I’ll have to read it to find out for myself if the two books share anything other than the same title.

Then there’s the new novel by David Robert Alexander, from here in the city. The Theory of Crows explores family relationships seen through the lens of Indigenous struggles for self-identity.

Another recently re-released book of essays  by a prairie author, The Crow Who Tampered with Time by Lloyd Ratzlaff looks interesting.  And, I’m thinking I’d like to try The Crow Road by Iain Banks, too. First out back in 1992, it's been re-released and stands as one of Bank's finest novels.

The crow in my own new release comes from an actual crow that sat outside my mother’s nursing home window. That particular crow became the catalyst for the rest of the novel. Perhaps when you’re dying, crows really do appear more often.

Any crow books that you’d recommend?

Email ThisBlogThis!Share to TwitterShare to FacebookShare to Pinterest
Labels: crows in novels

While searching the internet for a possible gulag bread recipe to try and re-create for my upcoming launch, I again stumbled on the term dokhodiaga which means “goner.”  It’s the fate of one of Katya’s co-prisoners in my new novel, Crow Stone.

Dokhodiaga (or dakhodyaga) is a frightening term and relevant not only to the dying in a faraway gulag camp somewhere in Stalin’s era. It can apply to society in present-day Canada, too. I’ve seen dokhodyagas in the last week here in Winnipeg.

A couple of them were sitting in the pretty dining room at the care centre where one of my dear friends is living out her life with a rapidly soul-sucking dementia. It’s sucking my soul … she, hopefully, is blissfully unaware of her new world of institutionalized personal care, surrounded by goners who yowl with imaginary pain or fold the same napkin over and over, humming off-key.

The ‘goners’ are also on our Winnipeg streets. Maybe they're the ones who hold up signs saying, Smile, God loves you. Or, any little bit will help? No, they’re not goners, not yet. It’s the other ones, huddling in bus shelters under dirty blankets, surrounded by garbage, and other soul-less goners. The ones who can’t ask for help. One of them froze to death during our recent cold snap.

The goners. Without hope, maybe we’d all be goners. Like those in the gulag camps who could no longer work and then wouldn’t get food and who then got weaker and still couldn’t work and gradually disappeared—like our street people, our dokhodyagas. Here, in Canada.

Dare I try a Russian gulag bread? Somehow, I don’t think we could ever appreciate how it tastes. We’re not hungry enough.

Nobel Peace Prize award acceptance speeches  will be aired on December 10th from Oslo, Norway. One of the three recipients is the International Memorial Society, founded in 1987. Memorial’s aims have been to reveal and showcase the crimes of the Stalin years. While it's now legally banned in Russia, it continues to function in various other countries.
I try to highlight these abuses in my own humble way through my stories. The Kulak’s Daughter (aka, Red Stone) is a novel focused on the  First Five Year Plan, to liquidate the kulaks. It destroyed my mother’s family farm, killed my grandmother, and toddler uncle. The sequel, Broken Stone, was about how my mom and her siblings managed to dodge a state orphanage, leave the Soviet Union and narrowly avoid the famine, while her dad, my grandfather, was not allowed to leave … how he managed to survive the Holodomor and then disappeared into the behemoth of the Great Terror.

With the sacrifice of the Soviet Red Army, under Stalin’s ruthless leadership, the Nazis were finally crushed and USSR's reward was the Iron Curtain and the loss of freedom for millions of east Europeans. Stalin’s Red Army turned ordinary men into monsters, many who turned to the bottle to numb any remaining humanity left inside them.  Now in Crow Stone I explore how civilians like my mom were worked to death in inhumane forced labour camps ... again under Stalin.

That these horrific things happened under Stalin’s leadership is not disputed. But that modern Russia continues to deliberately downplay the human rights’ abuses under Stalin shows that Memorial’s mission is far from over.  Instead of healing, there is continued repression and ruthless violence. Holocaust survivors can go to numerous centres throughout Europe and re-imagine the Nazi horror of concentration camps and extermination centres. But an organization like Memorial honouring the memories of my own broken family becomes outlawed in the vary places it happened.
I was fortunate enough to have access to my family members' secret police files in Zhytomyr.  The last entry, was a letter dated August 16, 1989, from the KGB acknowledging that my uncle, Gustav, was indeed politically repressed and executed in 1937.  His brother, my grandfather, had a similar fate but that was waiting for me to discover.

The fact that Memorial is now considered a foreign agent and banned in modern Russia, under Putin, proves that its truths have power. Putin is afraid of the truth. Long live Memorial. Maybe someday I'll be able to create a memorial to my grandmother out in Yaya, Siberia.  For now, I can only write stories. 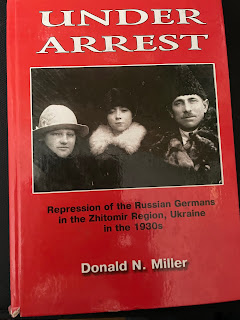 And, forever, I'll be grateful to Don Miller, who introduced me to my mom's home and family. His book, Under Arrest, did for me, what Memorial is doing for human rights worldwide. If I had a voice, I'd be giving Don Miller his own Nobel Prize for Peace.  He has written several books and has a great website where he showcases extensive research.

Email ThisBlogThis!Share to TwitterShare to FacebookShare to Pinterest
Labels: In the Midst of Wolves, Memorial Society, Nobel Prize for Peace, repression, Stalin