The stork delivered Red Stone yesterday and I'm grateful to the Rebelight delivery team for its safe arrival. The cover with its stork profile means a lot to me. The original was taken while I was researching my family history in Ukraine by a fellow traveller, David Lange.

It was curious, having a nature guy along on a genealogy trip. While the rest of us were hunkered down trying to decipher old files in musty smelling archives, or interviewing seniors with mouths filled with gold, David was out photographing birds. And what beautiful photos he took! 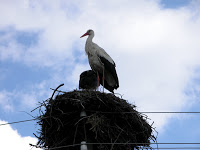 Of course, it was impossible to miss the storks. The birds are huge and during May, when we were there, they are busy parents, soaring back and forth as they feed their young. Storks like the unpopulated rural villages, and the villagers like the storks. Storks bring good luck along with the babies. They work in pairs—kind of like our Canada Geese. And, like our geese, they return to their same nest year after year. 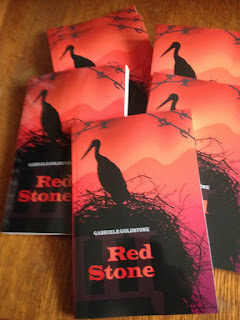 I'm thrilled to have this stork on my cover. It represents a nostalgic rural life in Eastern Europe that is being threatened by urban sprawl with its noise, air pollution and busy-ness. To me, the stork also represents the kulaks who worked hard on the land to support their families.  I'm reminded of a story my mom shared about how as a young girl she could never quite catch the stork when it brought a new brother or sister.

I didn't catch sight of the stork delivering my book either. But then, maybe the storks are being replaced by drones!
at June 09, 2015 No comments:

I can’t let this day in June slip by, without remembering the grandfather I never had. It wasn’t until I went to Ukraine in 2004 and searched through former KGB files in the small city of Zhitomir (Zhytomyr) that I “discovered” my grandfather. What I learned I brought back to my mother, who at eighty-six still did not know what had happened to him. 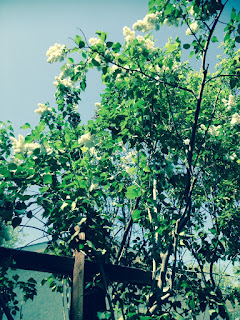 The file on my grandfather is rich with detail. In June, 1937, spring unfolded with its blooming maybells and lilacs like it always does. My grandfather shared a rented room at 66 Andriivska Street in the Polish section of town near the Teteriv River.  Of course, being a farmer, he would no doubt have preferred being on the land rather than in a crowded city. However, his farm in Federofka had been expropriated back in 1929 to make way for a collective. Since then, it appears he struggled to make a living with his horse—a sort of taxi service

When I visited the area I walked near the place of his final arrest, but the house itself was gone, turned into a vegetable plot.  Speaking of plots, 1937 and 1938 were the years that Stalin’s paranoia reached a frightening crescendo and my grandfather became one of its victims. During the ‘kulak operation’ 387, 000 former kulaks were executed.

According to the Zhitomir file, my grandfather was arrested by Officer Kawrasky of the NKVD. A detailed list was made of his possessions which included: a Bible, a letter from a friend, eight addresses written on paper and his work permit.

All summer long, when my grandfather was not rotting in the sweltering heat of the overcrowded jail,  he was being interrogated by a Troika (three person court).   In the NKVD file  I was able to read (through a translator) of my grandfather’s crimes. He tried to get a German passport in Kiev, not once but several times. (They said this was when he passed on information). He received money from East Prussia, not once but several times. (This was payment for his spying activities.) Of course, as a former kulak, my grandfather was already guilty.  Such were the times.  My grandfather was charged with counter-revolutionary activity—Article 58. Stalin was growing fearful of the rising Nazi party and suspicious of all foreigners inside his own country.

My lilacs are still blooming and now on June 3 I think of how beautiful seasons do not mirror suffering, injustice, violence or crime.  Beauty must not be mistaken for goodness. The two are not the same.
at June 03, 2015 No comments: