Seventy-four years ago, today, Hitler killed himself in a Berlin bunker. And while he took the easy way out, for others, there was a huge mess to clean up. A bunch of crazy German men destroyed countless lives. 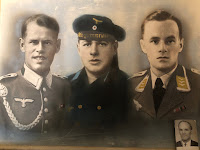 What a sad, difficult time my family had. And it affects people to this very day. It affects me. After all, why am I going to Europe this summer if not because of Hitler? That’s where my parents spent the first thirty-five years of their lives . . . where they met and married. . . where they grieved and dreamed. That’s where my two half-brothers lived and died. 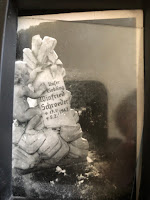 So, while it happened long ago and far away, for me, when I look at the photo of my dad and his brothers—he’s eighteen and in his Luftwaffe uniform—I know that Hitler still affects my life. When I look at the photo of his young son’s grave in some conquered Polish city, I know that little Winnfried’s 1942 death impacted my life growing up here in the middle of Canada. Maybe Dad spoiled me . . . just a bit. . . because of Winnfried?

We’re still cleaning up Hitler’s mess. I guess that’s why I still write about the old days. . . still trying to figure it all out. How did a whole nation get swallowed up by Hitler and his perverted ideas? What evil do we have to keep watching out for, today in 2019?
at April 30, 2019 No comments: 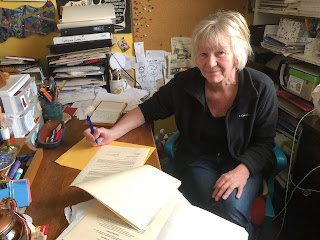 Contract signed! My book, Finding Amber, (tentative title) will be published by Ronsdale Press from Vancouver, BC.  I'm feeling honoured and excited!


The story's set during the late thirties in the former East Prussia. I'm doing things backwards with the travel happening after I've written the story. But I'm so thrilled with how things have worked out.

On my Baltic biking itinerary is an overnight stay in Nida, Lithuania—a small beach town on the Lithuanian half of the Curonian Spit. The Germans called it Nidden, and it was the summer retreat of Thomas Mann. His books were later banned by the Third Reich—in spite of being a recipient of the 1929 Nobel Award for Literature—and he left by 1933. Supposedly the Nazi government mailed him a charred copy of his novel, Buddenbrooks, and he quickly got the message.

In 1939, Herman Göring confiscated the house as a holiday place for injured Luftwaffe personnel. Nowadays, his restored cottage holds the Thomas Mann Cultural Centre and the community hosts an active writing colony. His grandson, Frido Mann, released My Nidden: On the Curonian Spit in 2012. Another book to read to help me appreciate the tortured history of this beautiful area.

I studied Thomas Mann years ago when I majored in 20thcentury German Literature. It’s crazy how all these years later, I’m still reading his work. Thomas Mann loved the landscape on this Amber Coast…the sand dunes, the salty wind, the Baltic.

In my WIP, my character—Katya—loves it, too. And I’m on pins and needles with anticipation to experience what I have until now only imagined.
at April 17, 2019 4 comments: