My dad painted this when he returned from five years in a Soviet POW camp.  He'd been a Luftwaffe pilot during WWll, later ending up on the Eastern Front with the Military Police. 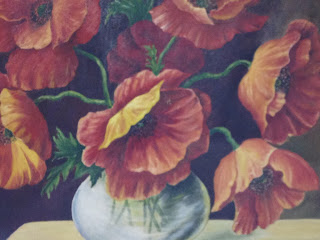 Remembrance Day's become more complicated for me over the years.  Robert Fisk's article in the Belfast Telegraph, most closely mirrors my changing attitude. Bottom line:  war is wrong.

And in case you don't read the whole article, here's a clip from his conclusion:  "The poppies were there to remind us of our duty to kill more human beings."
Posted by Gabriele Goldstone at 8:12 AM 3 comments: 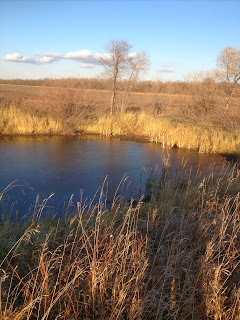 My dogs and I have walked these fields and stopped by this pond countless times. It's part of our neighbourhood, part of our routine. I never stop being in awe of the colours, of the timelessness of nature.

But change is in the air, and I'm not referring to the coming winter.
This area will soon be destroyed so that a new development can take its place.
Soon the pond, the woods, and the farmer's field will become houses for families. This is not a bad thing. It just is. And so I wanted to post these photos to remind me of my meanderings when this pond is replaced with a new neighbourhood called Ridgeway South. 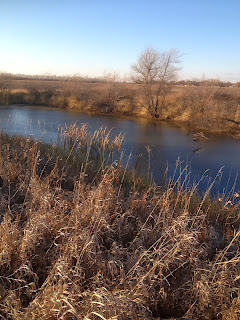 South of the Harte Trail
Posted by Gabriele Goldstone at 8:56 AM No comments:

Seems I meandered a bit off the blogging trail in the last year. Well, I'm back, back to meandering and musing.  Nothing earth-shattering to report. No new book contract.  I'm still hobbling along in that general direction, though.  In my case, I guess it's a long and winding trail full of potholes, and various other little detours. But, I'm still on it and have met some wonderful fellow travelers. It's a journey, not a destination—a lifestyle. And like that philosophical tree that falls in the forest, I will continue to write, whether someone reads my words...or not.

A book I've been reading is called When the Gods are Silent by Mikhail Soloviev. I've got the German translation which I found in my father's book collection. It's a well-used book, taped up with a tattered homemade cover, and filled with pencil markings and notes which I assume are my dad's. I love the idea of reading a book he once read. I can still see him sitting at the kitchen table with his mug of instant Nescafe coffee, and a piece of homemade raisin cake, head immersed in a book.

This book was published in 1953. (Originally in Russian.)  It's an amazing narrative that follows a main character and his family through the Bolshevik revolution up until the end of World War 2.  As I read I have to keep googling places, people and events. It's an eye-opening look at how communism attracted the Russians and then became their worst enemy. I can't find any information about the author, Mikhail Soloviev. If anyone can guide me to some, I'd be grateful.

Posted by Gabriele Goldstone at 12:15 PM No comments:

When I heard about the meteor crash in central Russia I was immediately curious about where it was. Ural Mountains? Okay, I know where those are. Chelyabinsk? Near Kurgan? I went to my map of Russia, and sure enough, it's the same place that I pinpointed years ago. My mom spent a couple of years in a prisoner of war camp there. Helping the Soviets with some major project. It was all quite vague. What she did remember was the hunger, the cold and always, the bugs.

Chelyabinsk. Google it. It's set in a heavily industrialized area. Miserably cold in the winter, just like here in Winnipeg. Mom became the Starosta in her camp barrack--possibly because she could speak both German and Russian. The all-women labour camp had to supply coal for one of the factories there. Chelyabinsk was a major tank and tractor producing facility. It's nickname once was Tankograd. The area is considered the most polluted place on earth. In a Globe and Mail article, a teacher is quoted as saying, "The city is a place where people always seem bitter with one another."

There's another Chelyabinsk. It's hidden underneath the ground and called Chelyabinsk -40.  It was the first Soviet plutonium production complex. Construction for this underground nuclear facility began in 1945. Could my mother have been helping build this complex?

She shared the odd story about her experiences. It's where she learned to kill a crow with a stone so that she'd have some meat to eat. It's where she lost all her hair from some herbal remedy she took when she was sick. It's where she watched a friend burn and then roll in the snow, becoming a human ice cube in the process. Mom said, "she went crazy after that." It's where she helped sober up a campguard so that he'd be presentable to his superiors. It's also where Mom spent a memorable Christmas Eve in a freezing cold barn. I'll have to share that poignant story sometime. Chelyabinsk. I finally know how to spell it. I wonder what Mom would say, now that the whole world knows where it is. She'd probably shrug her shoulders. It was a place she wanted to forget.

Mom got to leave Chelyabinsk in 1947. By then she was quite ill and the Soviets figured they'd get no more labour out of her.

This meteor crash just might enlighten the rest of the world about Chelyabink's history.
Posted by Gabriele Goldstone at 1:32 PM No comments: