Happy New Books to us All!

2008 is looming large. I've been looking forward to it for so long. I got the 'phone call' from my publisher back in December/05, signed the contract in January/06, and have been antsy for my book to actually come out ever since.

Of course, I've tried to keep busy. I did re-writes, wrote a sequel (and now working on re-writes for that), and I've been busy learning about book promotion. I consider connecting up with the class of 2k8 to be a great gift. They are a passionate group of debut novelists and it's just so empowering to share this thrill of writing success with like-minded people. We all lead very different lives, in very different places, and yet - through the power of the internet - we are sharing this incredible trip together.

Lots of books under the Christmas tree for the whole family. I got my two wishes: Kurt Vonnegut's Slaughterhouse-Five. (How come I've not read this before?), and The Whisperers, Private Life in Stalin's Russia by Orlando Figes (new release and I can't wait to get into it).

My two daughters' book gifts include: Unschooled by Gordon Korman (he's always been a big favorite at our house), The Murder of Bindy Mackenzie by Jaclyn Moriarty, Kenneth Oppel's Darkwing, and an autographed copy of Spider's Song by local writer Anita Daher (she's amazing!). And yes, I'll be reading their book gifts, as soon as they're done.

My husband got the edited sequel to Lord of the Rings, and my son ... my son ... got no book at all. He was raised on books just like my daughters ... so I don't know why he's no longer a reader. Maybe you just can't be a (video) gamer and a reader at the same time.

The weather outside is perfect for reading inside. Talk to you next year - in 2008! (Finally!)
Happy new books to us all!
-gabe

That's a big part of the Christmas magic, isn't it?
The anticipation, the secrets?

My all time favorite Christmas book is The
Polar Express by Chris van Allsberg.
I so enjoy challenging the sceptics
- the unbelievers - especially when they're
only eight years old. What's your favorite
Christmas book?

To all of you ... this is my Christmas
wish ... keep believing in the magic,
not just of Christmas, but of life.

An evergreen tree stands precariously in 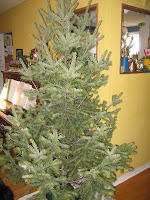 its stand a few feet from me. In a few hours,
when everyone's home, we'll turn it into a
Christmas tree. We'll use the same decorations
we've used since the kids were little and I think
maybe my kids - now hidden behind eyeliner,
six foot frames, and intectualizing (okay,
there's three of them and they're each
quite different) - have a little-kid-bond with
this piece of forest that enters our house
every December.

It's a Christmas tree that started my novel. In
fact a short story I wrote, "The Secret Christmas
Tree" was a finalist in a 2003 Writers' Union of
Canada contest. I'd hoped for the story to become a
picture book. One editor at a Canadian publishing
house sent me a very nice rejection letter and said
the story seemed to belong to a longer piece of work.
And so I started to surround my Christmas tree story
with what is now my debut novel.

No, I won't repeat the story here.
But my mom - almost 89 - and now closer to
the little girl she once was than ever before,
repeated her Christmas tree memory to me just
the other day. It's a memory of a 1929 Christmas
when Stalin had outlawed the religious event.

She even sang the old German carol she
remembered singing with her little brother.
Some of her details are different, of course from
my story. I've written a story, after all, and not a
memoir. But I hope I got the essence - the smell
of pine, the sense of secrecy and the magic that
Christmas is for a child - whether 9, 89,
or 19 years old for that matter.

I hope you're getting your to-do list checked off.
Enjoy the rush.

-gabe
Word of the day:
essence
the individual, real, or ultimate nature of a thing

I've been focusing on my trip to Ukraine in this blog,
but today I'd like to meander a bit. I've got some
exciting news to share. I'm going to the TLA
http://www.txla.org/conference/conf.html
in Dallas, Texas in April to speak on a panel discussing
'cultural diversity in children's literature.' I've just
finished booking hotel rooms, so that makes it feel official.

Now I can start worrying about what in the world
I have to share about 'cultural diversity in children's
literature.' But then I realize that The Kulak's Daughter
is the book I never got to read when I was a child.
When I was in school I was ashamed of my immigrant
background. I was ashamed of my parents and their
foreignness. They could barely speak English. I couldn't speak
any English, either, when I started kindergarten. And it wasn't
just language - it was a clash of cultures. My reading
in the school system was about "Dick and Jane" not
about characters like my "Olga." (If you check
out this link http://faculty.valpo.edu/bflak/dickjane/neighbors.html,
you'll see that cultural diversity did eventually enter the popular readers
- my school must have had older books.)

With Christmas approaching, I now cherish my family
traditions. We celebrated St. Nicholas day on December 6th with the
boots put out the night before. We celebrate Advent every Sunday
and we'll open one gift after sharing a poem, song
or story in front of the tree on Christmas Eve. There
is no shame.

Cultural diversity in children's books is as important as
cultural diversity in life. Children can feel so lonely when
they are labeled as different. I know. Through books, we
can empower those on the edge. Books are a one-on-one
relationship that not only reveal new worlds or old worlds
but also empower the child to understand these other worlds.
Wow.

Hey, I think I figured out the slant I want to put on my panel talk!
Talk to you soon. I've got to go console a cat who can't get past
the fact that it's -26 out there.
-gabe

Word of the day: shame
- a painful emotion caused by consciousness of guilt, shortcoming, or
impropriety
from Webster's New Collegiate Dictionary

Email ThisBlogThis!Share to TwitterShare to FacebookShare to Pinterest
Labels: shame

One look out the window confirms
the season - it's December! I'll be
visiting a Christkindl Markt this
afternoon to get some German candles.
Later, we'll light one candle
to mark the First Advent.

It snows in Ukraine, too, and so I
guess these rocks will be hidden for
the winter. 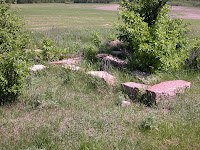 This pile of red granite is all that's left of my grandfather's windmill. We found it - with Helena's help - in one of the
fields of Federofka. The rocks sit on a slight incline near some lilac bushes which were in full bloom when I was there.

The red granite is flecked with black. It
sparkles just a bit. I know this because
I've got a chunk of my grandfather's windmill
rock beside me as I type. It's my token of the
grandfather I never knew. His character
is symbolized by this rock. I describe him
as hard and determined - but with the
capacity to have a twinkle in his eyes.

When I was researching Lenin's death, I
was amazed to learn that his mauseleum
- rebuilt in 1929 - is partially made of red
granite. Here's a link to read more about
Lenin and his tomb.
http://englishrussia.com/?p=783

Talk to you soon,
-gabe

Word of the day:
Token: an outward sign or expression:
a symbol, or a small part representing
the whole.
(Webster's New Collegiate Dictionary)
at December 02, 2007 1 comment: