Our ancestors were hunters & gatherers, and so am I. I collect stones. They take zero maintenance, and my garden is better because of them. (Says a lot about my green thumb.)

As a writer, I also collect words. During the last day or so, three words that I’d love to use, stayed with me and I’m going to share them.

First there’s petrichor. Outside it’s raining cats and dogs. I keep my window open and inhale. Ah there’s nothing quite like petrichor…especially in the fall when it’s mixed with the smell of decaying leaves and the sound of migrating birds.

I was delighted to discover that the word petrichor—the smell of rain—comes from the Greek word petra…meaning stone and chor…which refers to the fluid in the veins of gods.
Then there’s the word pernickety. All those consonants! They prickle like the word’s meaning. The word jumped out at me while reading a translations of Goebbel’s 1940 diaries.  Another word he used that I’d like to find a perfect spot for, is the word brouhaha. Again, an example of onomatopoeia.
Words are like stones. They can be used to build or to destroy and they have stories within them. A writer’s tools.


The Nazis carefully manipulated the German people with their propaganda. We call it fake news. A bunch of words. A lot of power.

Okay, now let me try to use these three delicious words in one thought. Petrichor drifts in through the open window, alongside the brouhaha of squabbling blue jays, while I attempt to text on my pernickety smartphone.
at September 24, 2017 No comments:

Email ThisBlogThis!Share to TwitterShare to FacebookShare to Pinterest
Labels: petrichor

That beautiful sandy Baltic coastline I've mentioned in previous posts was not a good place to be back on the night of January 30th, 1945.  That night more than 9000 people died (women, children and injured soldiers) when the Wilhelm Gustloff was torpedoed by the Soviets. The ship was evacuating refugees from Gdingen (Gotenhafen) from the Soviet Army.  This tragic story, while not common knowledge, has been immortalized through various books.  Günther Grass (Crabwalk in 2002) and Ruta Sepetys (Salt to the Sea, in 2016) have fictionalized and thus remembered the tragic loss of civilian life in that cold sea.

There was a second tragedy that happened the very same night, on the same sea. Because there were so few survivors, this story is little known.

On the coast about twenty kilometres south of the spa resort, Svetlogorsk (Rauschen) more than 5000 Jewish women and children ended their death march from the various concentration camps in East Prussia.  Under SS machine-gun fire, they entered the icy Baltic near Yantarny (Palmicken). 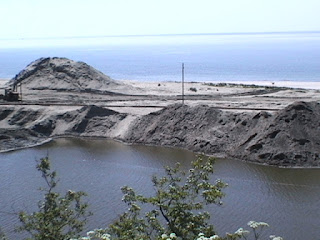 Yantarny means 'made of amber' in Russian and is still an amber-processing centre. The photo above shows the open pit mines of Yantarny. (Image: Aleksandr Popadin.)

The Baltic...a graveyard for so many. Did my character, Minna, end up here?