I didn't expect to find any references to Siberia during my fall hike yesterday past historical points of interest. After all, the Manitoba landscape  ... in the middle of Canada, is … is what?

Manitoba’s landscape is mostly flat steppe. (Technically, the difference between a steppe and a prairie is that prairie grasses are taller.)  In the fall, the golden aspen become a centre point (Siberia has its birch trees). 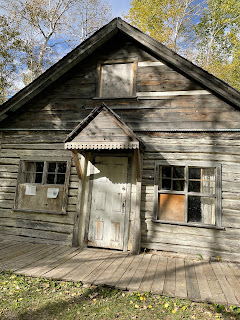 In the winter, Manitoba’s prairie promises wind, snow, and cold. Hmm. Like my mother, a Siberian exile survivor, always said, “just like Siberia.” It’s a wonder she stayed in this brutal climate after her first winter back in 1954. But then, in those days, she had few options and surviving a cold Winnipeg winter was nothing like starving during a cold Siberian one. 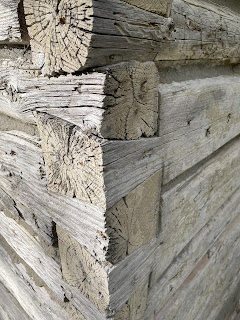 Anyway, imagine my surprise when I visited an old homestead (built by East European immigrants, Frank and Rose Kudlowich, in 1936), outside of Winnipeg yesterday.  The place had been part of the movie set for a 2013 Keenu Reeves movie called Siberia (terrible reviews, but in this trailer you see a glimpse of the cabin at about 1:23). Perhaps my mom was right to compare Siberia with Manitoba. Here's a link to a Free Press article.

Winter weather, Siberian or Manitoban, was a strong point of contention for my mom and me. After years of quickly hiding my snow boots and other outdoor gear before she visited, the secret of my day-job finally emerged. She cried with disappointment. (Yes, I was a disappointing daughter in many ways.) After that, I had to constantly defend my decision to work in the Siberian/Winnipeg winters as a letter carrier. I thought it was a great job for a struggling writer raising three kids. I had solid income, regular hours, great benefits (including a pension and the health to enjoy it) and most importantly, head space to think my own thoughts. Another perk was the sunshine all year long and an appreciation of what a cold Siberian winter might have been like. Call it research.

I hope to revisit this 1936 built cabin later in the winter when the wind blows and the snow is deep. Sounds rather inviting. But for the millions of exiles back in Stalin’s world, the transition camps, special settlements, and gulags were anything but inviting. Winters can be harsh in this world and with the global energy supply threatened by Putin’s war, it’s a serious matter. We’re all vulnerable to extreme weather, especially when politics manipulates our experiences of it.

I’ve been reading Kiss the Red Stairs and have mixed feelings about it. It’s very well-written, poignant and passionate. The author, Marsha Lederman, is a well-known Canadian journalist so I'd expected her research would be well-presented. With this memoir, she does a great job of connecting her life with her parents’ Holocaust memories. I also appreciate how she connects her losses to Indigenous and Black traumas.

I wasn’t quite as engaged with the trauma of her dysfunctional marriage. Perhaps I don’t see marriage as such an important part of selfhood. I'm someone who’s chosen not to wear my wedding ring, for complicated reasons, so her sadness about her ring-less fingers didn’t touch me at all.

Like her, I also grew up without grandparents.  Perhaps I'm jealous about how much support she received as she explored her tragic family history. There’s no national day to remember the liquidating of the kulaks. No national memorial for the victims of the 1937/38 purges. My grandmother, dead of typhus in Yaya, Siberia has no gravestone. Neither does my baby uncle, dead on a boxcar during the long trip up to Yaya. Or my other uncle, dead while building the White Sea Canal. Numerous great uncles, aunts, shipped away to be forced labourers and never heard from again.  No recognition of their spent lives … not in Stalin's world. No reconciliation now in Putin's world.

As the daughter of a German father (a pilot for the Nazis) and a German-Russian mother, I grew up here in Canada feeling shame and embarrassment.  I grew up feeling that I was the daughter of bad people. Reading this memoir does nothing to alleviate that shame. I will never be good enough. I can’t erase who I am or who my parents were.

I appreciated her expressions of gratitude ... something I'm also overwhelmed with.  I find reasons for it here in this democracy called Canada, in diverse friends and in rustic nature.

One thing I have learned ... evil is not out there. Evil stares back at me in my own reflection. This knowledge keeps me humble. No righteous indignation in my life.

I’m sure it was a cathartic experience for Lederman to research and write this book. And her honesty and vulnerability lends it power. But there was one more thing I was waiting for in this memoir … forgiveness.  She's a 2G —second generation Holocaust survivor—and I will always be guilty — the second generation perpetrator.  This is my inheritance and I must accept that with the help of Reinhold Niebuhr's 1932/3 written serenity prayer.

Email ThisBlogThis!Share to TwitterShare to FacebookShare to Pinterest
Labels: Kiss the Red Stairs

This has got to be my most favourite time of year. September. The month of change, of harvest, of fragility. The month when the gift of summer still radiates from the tree’s fruit, from the earth’s vegetables, from the sky’s migrating birds. 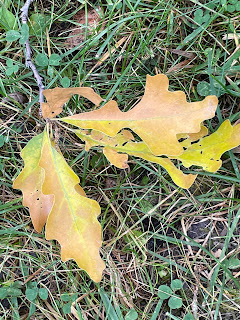 I live near two schools and on the sidewalks (yes, my neighbourhood has actual sidewalks!) youth saunter past—some with voices that trill with excitement—others who drag their soles (or is that souls?) with seeming dread. September and school ... positive possibilities for some; stress and anxiety for others.

There's also been a deathly tinge to my Septembers, like leaves that have changed colours. One of these deaths was my grandfather—executed during Stalin’s Great Terror in 1937. Discovering his interrogation papers and the exact date and time of his death (3:13 AM, September 19th, Zhytomyr) back in 2004 has added to the season's melancholy.

Back in September, 2019 I looked forward to visiting Nida, Lithuania once called Nidden, Germany. Located on the idyllic, sand-dune covered Curonian Spit, the sleepy beach town of Nida, still honours the summer retreat of Thomas Mann. It’s a town he had to evacuate in 1933 when the Nazis delivered a charred copy of Buddenbrooks to his residence.

I was enchanted by the view from Mann’s writing space in the picturesque blue cottage. Many writers like a natural setting while they write. The internet is full of exotic locales set deep in the woods or on beach properties to entice the muse. But for me, it's usually my own backyard that provides a natural setting for my creativity.

The ironic thing is, once a writer is in the ‘zone’ his or her surroundings dissolve as the story takes hold of the mind’s eye.  I might be sitting and watching the squirrel chasing the chipmunk when all of a sudden, I’m in a car catching the dialogue between two arguing parents as I’m transported to the other world of my novel-in-progress.
I wonder what Thomas Mann saw looking out of his studio upon the Baltic lagoon? Did he see the crashing waves of political upheaval coming into his country? He called it the Italian view. Did it remind him of his novella, Death in Venice, published back in 1912 before he even went to Nida?

It seems ironic, but as writers we’re influenced by our surroundings even when we ignore them. I’m heading out to my favourite writing place this coming week during this season of decay and change. I’m confident in its power to inspire me and somehow it will find its way into my stories. No doubt the waves from Lake Winnipeg’s rustic beaches will lap at the edges of my pages. 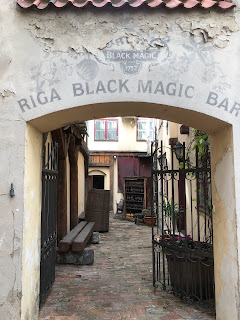 It’s been an eventful 3 years since I undertook my Baltic and Kaliningrad cycling adventure. Who knew then what a privilege travel would be? Who knew then what a precarious new chapter Russia would be introducing to eastern Europe.
Travel has always been a privilege although many of us might see it as a right. Now with the spread of disease, the consequences of global warming and an unstable political situation, I am more than ever grateful for the limited travel I have managed to do. More than ever I scratch my travel itch through immigrant volunteer work and through books. Books—safe, cheap, environmentally sustainable and no masks or testing required. 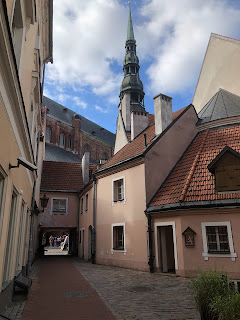 Still I bask in the memory of landing in Riga (about the size of Winnipeg) and embracing the crisp Baltic sunshine and all that incredible history. Riga, Latvia had never been on my travel radar before but it’s a true gem of a city. Perhaps its vibrancy is because democracy and freedom there are only 30 years old. As a former Soviet-occupied country, Riga has a living memory of political oppression.  Unfortunately, in spite of the security in being a NATO country (since 2004), by sharing a border with Belarus and Russia it has a constant reminder of its vulnerable geographical position. 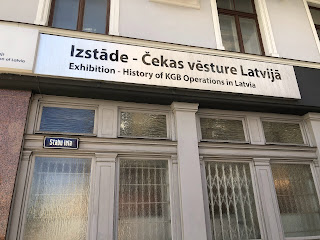 Nevertheless, Latvia thrives. Its KGB museums are not rewriting history like the gulag museum in Perm in the Urals.  Last week I blogged about how the Russians continue to confabulate their own history. In Latvia, they remember the past and they sure don’t want to repeat it. Repression in countries, like repression in people, leads to illness, unhappiness and isolation.

I’m grateful for the privilege of exploring historical Riga …a beautiful Hanseatic League port. Now it’s a place where NATO troops gather to prepare for another possible takeover. Why can’t the neighbours just mind their own business?