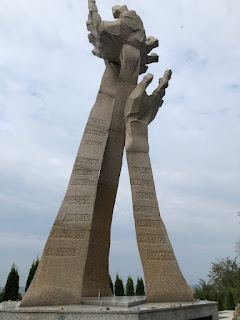 We had an incredibly mild holiday season here in Winnipeg. Single digit winter weather was a treat—we know it doesn't last. This is Winnipeg, after all.

Now imagine a war happening in bad weather. Imagine January, 1945.  Lots of snow. Wind.  Double-digit cold. Hunger and exhaustion has numbed people. The Nazis, now on the run, are desperate to hide their crimes.

One horrendous 1945 scene happened near Yantarny (in German times known as Palmnicken—site of an amber mine).

In '45, the Stutthof concentration camp, now Sztutowo, Poland, thirty kilometers outside of Gdansk, formerly Danzig, was hurriedly evacuated and its thirteen thousand inmates forced to march the two hundred kilometers up to Palmnicken.

The Nazi SS planned to dump the inmates in an underground mine tunnel, called Anna, to let them die. Of the thirteen thousand people, forced on this two-hundred-kilometer march, only three thousand survived. The rest succumbed to the cold and physical strain. (In contrast to the victims, we biked the same route in wonderful weather, enjoying the beautiful forests, gentle hills, and great restaurant stops along the way.)

When the prisoners arrived in Palmnicken, the amber mine manager refused to allow trek survivors into the mine. So the desperate SS guards forced three thousand dying people into the icy Baltic, shooting the victims who weren’t dying fast enough. Somehow . . . thirty-three people survived.

The Yantarny monument, created by Frank Meisler represents the hands of the dying people reaching up in surrender. In August of 2011, only seven months after it was made public, the memorial was vandalized. Anti-semitism hasn’t gone away. But neither has goodness.  Cherokee wisdom says we must keep feeding the good wolves in each other.
at January 12, 2020 1 comment: 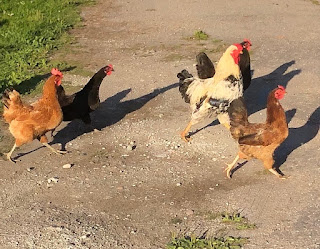 A writing friend, and fellow blogger, has challenged her readers to come up with a word for the year. I’ve done this in the past, before I knew it was a thing. Last year, I had the word, enough, like in I’m good enough, life’s good enough taped near my desk. I got that inspiration from reading Elizabeth Gilbert’s Big Magic.

This year, my word’s going to be two words (but they’re short). Own it. Cheating. I know. Own it. That’s my word. By own it, I mean, little gabby isn’t going to shy away from who she is or what’s happening. My inner child—self-conscious, insecure and hyper-sensitive—is going to own up to who she is—warts and all. Oh, and those warts, they ain’t pretty. But maybe I’m just at the age where the authenticity of pain . . . of salt in my wounds . . . beats the dead scar tissue of past hurts.

Maybe when I say own it, I also want to include Brene Brown's theme of being vulnerable. Yes, I'm going try to own vulnerability this year. . . wherever it takes me . . . even if it means writing boring blogposts. Trying to be perfect is way too stressful, too lonely, too boring. Thanks for the inspiration to MP Catherine Mckenna. Happy 2020.