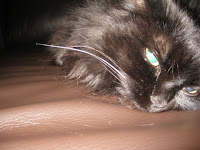 There's a reason annoying peeves are called PET peeves. My dear, sweet, soft, seventeen-year-old back kitty, called August, has the habit of crying like a baby beside my bed at about six every morning. Now this works as a great alarm clock on working days, but I like to sleep until maybe eight on the weekends. Dear kitty has no concept of weekends and she doesn't let up her irritating cry. I have gotten better at ignoring her - but only to a certain point. It's not like the poor thing is starving. She has access to her dry food anytime.
Recently, I came up from the basement to find her meowing at my bed when I wasn't even in it. So I'm thinking she just meows at my bed whenever life gets to her. I've never been the parent to such an old cat. When I was a child, my pet cats had short lives. They roamed the neighbourhood at night and inevitably got lost, beat up in cat fights, or run-over.
Getting up early on weekends isn't so bad, though. It gives me more time. Who doesn't appreciate a long weekend?
at February 25, 2012 No comments:

Email ThisBlogThis!Share to TwitterShare to FacebookShare to Pinterest
Labels: meowing 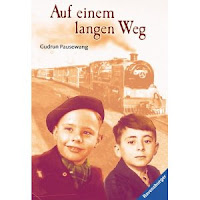 I've just finished reading another German YA novel. This one, again by Gudrun Pausewang, was first published in 1978. Auf Einem Langen Weg has not been translated to English (as far as I can tell.)
The book did become a German TV mini-series and was re-issued in 1996 with an image from the TV series as the new cover. It's the story of two young boys, separated from their family because of the chaos created when the German civilians are fleeing the advancing Soviet army.
I grew up hearing a variation of this story. My German community here in Winnipeg was mostly made up of WW II refugees.
The book reminds me a lot of the novel by Ian Serraillier, Escape from Warsaw (original title: The Silver Sword.) which became a British TV mini-series.
I asked a German contact whether books like Pausewang's are part of the German school curriculum. He said, no. It's also too bad that the children of German families in Canada have very little access to these books. It's their history, after all.
But I'm so grateful to the German schoolteacher, Gudrun Pausewang, who became the voice of these children's stories.
at February 19, 2012 1 comment: 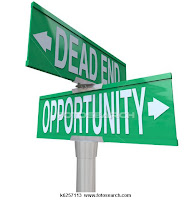 I should mention that my publisher, Blooming Tree Press - down in Austin, Texas - has ceased to exist. This means of course, that my book - The Kulak's Daughter - is no longer available.
Please contact me directly, if you'd like a copy.
And if you're interested in a reading about a frustrating publishing experience, check out this blog post by Lori Ann Stephens, a fellow Blooming Tree author.
Time to move on. I must focus on getting my sequel published. I also plan on releasing an e-book version of The Kulak's Daughter some time in the future. Watch here for details.
at February 06, 2012 3 comments: