When I heard about the meteor crash in central Russia I was immediately curious about where it was. Ural Mountains? Okay, I know where those are. Chelyabinsk? Near Kurgan? I went to my map of Russia, and sure enough, it's the same place that I pinpointed years ago. My mom spent a couple of years in a prisoner of war camp there. Helping the Soviets with some major project. It was all quite vague. What she did remember was the hunger, the cold and always, the bugs.

Chelyabinsk. Google it. It's set in a heavily industrialized area. Miserably cold in the winter, just like here in Winnipeg. Mom became the Starosta in her camp barrack--possibly because she could speak both German and Russian. The all-women labour camp had to supply coal for one of the factories there. Chelyabinsk was a major tank and tractor producing facility. It's nickname once was Tankograd. The area is considered the most polluted place on earth. In a Globe and Mail article, a teacher is quoted as saying, "The city is a place where people always seem bitter with one another."

There's another Chelyabinsk. It's hidden underneath the ground and called Chelyabinsk -40.  It was the first Soviet plutonium production complex. Construction for this underground nuclear facility began in 1945. Could my mother have been helping build this complex?

She shared the odd story about her experiences. It's where she learned to kill a crow with a stone so that she'd have some meat to eat. It's where she lost all her hair from some herbal remedy she took when she was sick. It's where she watched a friend burn and then roll in the snow, becoming a human ice cube in the process. Mom said, "she went crazy after that." It's where she helped sober up a campguard so that he'd be presentable to his superiors. It's also where Mom spent a memorable Christmas Eve in a freezing cold barn. I'll have to share that poignant story sometime. Chelyabinsk. I finally know how to spell it. I wonder what Mom would say, now that the whole world knows where it is. She'd probably shrug her shoulders. It was a place she wanted to forget.

Mom got to leave Chelyabinsk in 1947. By then she was quite ill and the Soviets figured they'd get no more labour out of her.

This meteor crash just might enlighten the rest of the world about Chelyabink's history.
at February 16, 2013 No comments:

While my dad focused on a thoughtful game of chess, other family members sometimes played the most frustrating game in the world, Mensch Ärg... 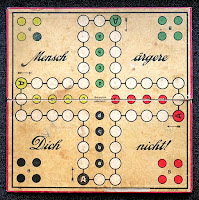