The Dangers of Turning Ten 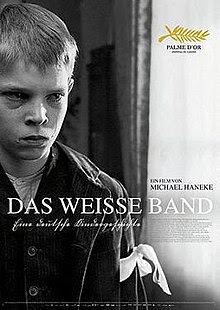 April 20th. Hitler’s birthday. The day ten-year-old girls loved because they got to be inducted into the BDM. Such proud little souls—eager to belong. Oh the pomp and ceremony. Not a sci-fi novel. A living memory. My mom was too old to be forced to join the Nazi youth groups, but my dad was eager to wear a uniform and march to Hitler’s beat. What a wicked time to be young and vulnerable.

I have to recommend the movie, The White Ribbon, with the sub-title, A German Children's Story, released in 2009, as a chilling glimpse into the mindset that formed a people who swallowed up the Nazi’s warped view. 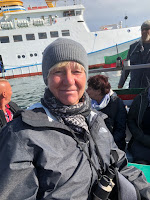 A highlight of my time in Schleswig-Holstein last September was a two-hour cruise to the North Sea island of Heligoland. It’s had a variety of overseers . . . Danish, British, and Germans and was of strategic importance to the Nazis. Now, as a tax-free haven, it survives on tourists like me who come via small ships. That's the ship called 'Funny Girl' behind me. What is it with Germans and their love of English names?

During the four-hour guided tour, I was able to appreciate a bit of the history and a lot of the natural beauty as we climbed 184 (yes, I counted!) steps up from the rocky pier. There are no cars or bikes allowed on the island (except for electric service vehicles) and this added to its peaceful ambience. 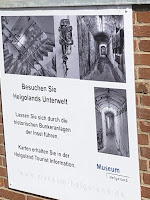 The island was far from peaceful during the Second World War. Soviet prisoners of war were used to build the extensive underground bunker system. I never had enough time to do the underground tour, but the above-ground tour had many ruins related to the war years.

The island was almost crushed on April 18th,1945 with bombing by almost one thousand British aircraft. After the bombings, scattered bones from old graves were gathered into one.  For two years after that the island was left empty and used for military practice.

Then, again on April 18th, in 1947, one of the biggest non-nuclear explosions—The British Bang or Big Bang—occurred. The Allies had gathered up most of the remaining ammunition stored on the island and blew it up. A huge crater still remains and it's forever changed the shape of the rocky island.

In 1952, the surviving locals were allowed to return and rebuild their island village. We hiked along winding paths past cottage homes with beautiful gardens. Our tour guide was a most affable fellow, obviously proud of his home.  Heligoland is a nature refuge where birds stop off during migration and northern gannets breed amongst the ruins of war. Amazing how life begins anew over and over. How I'd love to go back and stay longer. A true treasure. 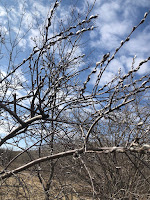 It always amazes me, when things get difficult for us humans, how unaffected nature seems. Whether it's death or disease or financial stress, nature just goes on doing what it does.

Because I'm immersed in the past, always researching something about my parents' lives, I can't help but compare and constantly refer to it. I'm boring that way . . . maybe that's why the kids moved out?

Anyway, in April of 1945, when the war was ending . . . with a painful, agonizing whimper . . . spring was emerging. No doubt there were pussy willows blooming as the bedraggled POWs straggled eastward to do their time in the Soviet gulag.

Did they find hope in pussy willows like I do?