Biking along the Baltic near Svetlogorsk (former Rauschen) in Kaliningrad Oblast in 2019. The characters of my new novel might have wandered along these beaches. 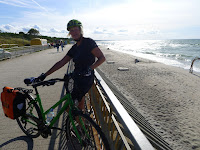 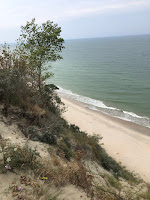 This area is known as the Amber Coast.
Dotted with spa towns during the German years and now embraced by Russian sun-seekers. 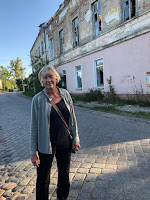 Being a detective . . .
We find the town of Slavskoye in the Kaliningrad Oblast (former Kreuzburg. East Prussia) Here I am on the main road of Kreuzburg. Then I try to find my bearings using a small map and my cousin's memories. 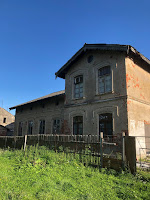 My mom attended this school in former Kreuzburg, East Prussia (now Slavskoye, Russia)  in 1932 after fleeing the Soviet Union. It was an unhappy time for her which I explore in  Broken Stone.

When I visited in 2019, bullet holes from the final battles of the Second World War, still scarred the partially inhabited building. Through research, I'd learned that the Wehrmacht had sought shelter in the school during the Red Army's advance back in 1945. 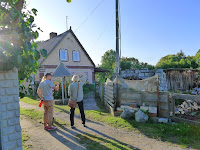 Found it! This would have been the family house that my mom and her siblings lived in after their escape from the Soviet Union in early 1932. Orphaned during collectivization, East Prussian relatives took them in.

When I visited back in 2019, a friendly, retired man from Kazakhstan lived there. The house was well maintained and his yard filled with flowers, in spite of pockmarks of long-ago bullets. 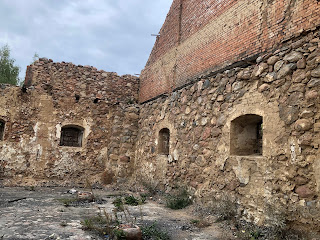 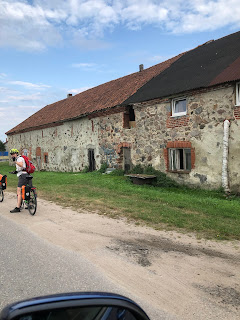 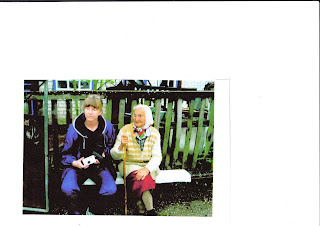 Here I am in Kaliniwka, (once Federofka) Ukraine, in my mom's home village, talking to Frau Helene Nickel. As the oldest woman in the tiny place, she was the historian of the area. She actually remembered where our family's windmill once stood and directed us to the now empty field where I found its foundation—a pile of granite. 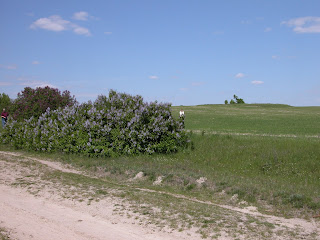 The slight rise in the distance indicates the spot where my mom's dad built his windmill. Walking the land of my mom and her family was surreal.
It was May and the lilacs were blooming. I like to think that they breathed in the same heady fragrance like I did. 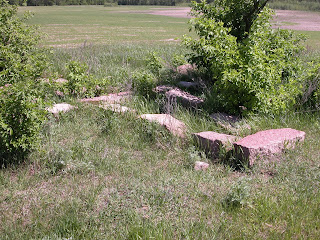 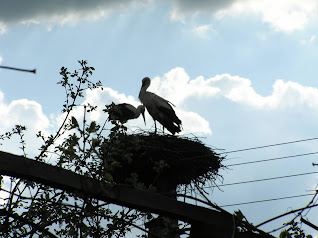 These storks, photographed in Heimtal, a village in Ukraine, was all the proof I needed that my mom's stories about her childhood were indeed true. 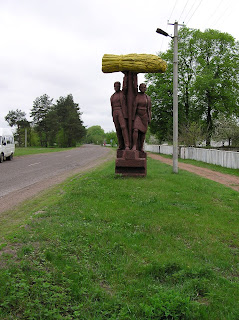 Welcoming statue at a former collective northwest of Zhytomyr, Ukraine.  My mother's family farm also became part of a collective, or kolkchoz, back in 1930, when she was exiled to Siberia with her mother and siblings. I explored this in my middle grade novel The Kulak's Daughter. 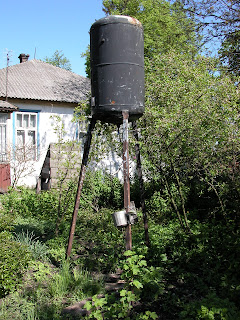 Innovation: Water for outdoor shower, warmed in black-painted plastic rain catcher.  Poverty in rural Ukrainian villages is heart-breaking and yet you have to admire their tenacity & creativity.
Photo taken in hamlet outside of Zhytomyr.