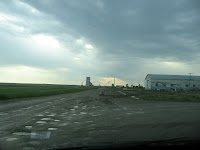 Who'd have thought that a little farming community in Saskatchewan could be so interesting? Not me. But last weekend I attended the German Russian Cultural Festival in Leader, SK (aka Prussia - really!) and was blown away - not by the famous prairie wind - but by the kindness, the good cheer, and a simply amazing wealth of stories in this small town.

The adventure began even before I arrived. Highway 32. (No, I didn't buy their bumper sticker that said, 'I survived Highway 32' - but I should have.) Check out the website. I felt like I was driving - not in modern day Canada - but in hard time Ukraine. Memories of my 2004 trip over there came flooding back as I manoeuvred around pothole after pothole in the pouring rain.

The rain slowed down as I approached Prelate - the small village 10 kilometers before Leader - where the St. Angela's Convent was offering up its dormitories for guests.

With the stopping of the rain - the amazing prairie sky revealed itself. I could see why the Germans from Russia fell in love with this area. It's simply overwhelming. More expansive than mountains, more accessible than an ocean, the sky scape does something to a mere mortal.
I breathed in the after rain air, while my eyes absorbed the land of the living skies (Saskatchewan's license tag line).

So I'll tell you more about my experiences, next post, once I force my eyes past that sky.
at June 22, 2008

Looking forward to hearing the details. :)