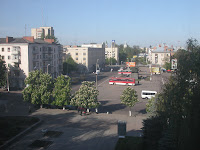 I'm currently working on edits (again!) for my book. One thing I'm wondering about right now is the spelling of the city of Zhitomir.
Here's what I learned. Zhitomir is the Russian and/or Yiddish spelling. Shitomir is the German spelling and Zytomierz is the Polish spelling. Zhytomyr is the current Ukrainian spelling. Poor city, it's been through a lot.
I suppose, I should perhaps keep the spelling consistent with the time period of the novel, which means I'll spell it the Russian way. It might not be the politically correct thing to do now that it's a vibrant Ukrainian city once again, but it'll be historically accurate.
Even here in Canada there's issues with the names of places. Several northern communities were once named after European explorers. I'm thinking of Frobisher Bay which was renamed Iqualuit in 1987.
The photo here is of 2004 Zhytomyr. It's a beautiful place. (Those are chestnut tree blossoms.) I'll have to share some more about it later.
at October 04, 2008

Email ThisBlogThis!Share to TwitterShare to FacebookShare to Pinterest
Labels: Zhitomir or Shitomir or Zhytomyr