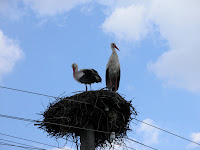 Every life is a story and each starts the same way. Once upon a time a baby was born. Today, ninety years ago, my mother was born. Here's nine decades at a glance.

1919 A stork delivered Else to Federofka (a small village near Zhytomyr which is near Kiev which is today in Ukraine. Back then, Federofka was part of the USSR.) 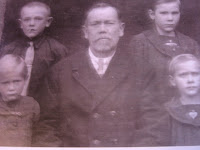 1929 Stalin's first Five Year Plan calls for the 'liquidation of the kulaks' and forced collectivization. At 11, Else (and her family) is exiled via freight train to Yaya, Siberia (near Tomsk). Else becomes an orphan.

1939 Else is now 20 and living in East Prussia - not too far from Königsberg (present day Kaliningrad). With the outbreak of WWII, Else becomes a worker in a munitions factory for Hitler and against Stalin. Her flight from East Prussia in 1945 when the Soviets gained control, is unsuccessful.

1949 As a half-starved 30 year old POW survivor (having worked in Stalin's coal mines in Ural), Else illegally crosses back into West Germany, finds her remaining scattered family, and starts to work in a hospital in Pinneberg near Hamburg. Here she later meets another Soviet POW survivor and later gets married.

1959 Else is now a 40 year old mama with 2 pre-schoolers in a new country called Canada. The family's first home is on Cathedral Avenue in Winnipeg's north end. Her husband, an ex-Luftwaffe pilot and five year Gulag survivor, gets a job in the furnace industry.

1969 Elsie (her Canadianized name) is a 50 year old potato chip worker, paying off a mortgage on a brand new house in the suburbs. She dearly loves her home on Kirby Drive and makes great friends with the neighbours. 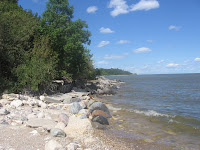 1979 Elsie is a 60 year old cottage owner and gardener. She's proud of her tomatoes and of her Sweet William biannuals which proliferate at the Lake Winnipeg cottage.

1989 Elsie's a 70 year old grandma. She crochets, chats, and travels - enjoying the golden years of retirement with the added pleasure of
Suzi, the dog, and a couple of grandchildren.

1999 Elsie's an 80 year old widow with a third grandchild. She'd been married 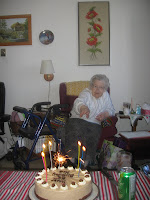 forty and a half years and lived in her Kirby house for almost thirty. She tries hard to adjust to living in an apartment at Meadowood.

2009 Now Elsie is 90 years old and yet another adventure begins. She has a new home in a nursing care facility - for now, here at Tuxedo Villa. Arthritis and osteoporosis have crippled her body, but her mind is still clear and she struggles to come to terms with her physical limitations.

Soon she'll make new friends, and together with her old friends, she'll continue to have warm (and not so warm) memories of a life of challenges that 90 years ago in Federofka, no stork, proud papa, or loving mama, could ever have imagined.
HAPPY BIRTHDAY!
at March 07, 2009

Happy Birthday Else! May you have many more. :~)

And I'm looking forward to reading your new book when it's released.

Thanks, Veronica! I'll tell her.

Many warm blessings to your mom, Gabe. She's had one helluva life with so many emotional ups and downs. What a fighter. Tell her, Ya zhelayu tebe schast'ja, for many years to come.

Thanks, Stacy!. Wow ,you are multi-linqual! I will tell her.

Dropping in late to wish your dear mother a belated happy birthday. Gabe, the photo diary is priceless. What a life your mother has lived. No wonder you've been researching it and writing about it.

Wow it sounds like she's had an incredible life! Just amazing.

I just wonder if your mom and my mother in law (Lydia) knew each other. Lydia left in 1929 in the middle of the night. She is also celebrating her 90th soon. I don't know your mom but please wish her a happy birthday from another Federowka child from 1919.