My Town Monday and the Burton Cummings Theatre

Winnipeg has a downtown establishment called The Burton Cummings Theatre. (I got to watch Leonard Cohen there a few years ago.) The venue was originally called the Walker Theatre when it was built back in 1906. Then in 1991 it was re-furbished and re-named after one of our famous sons, Burton Cummings. Burton was the lead singer of the internationally acclaimed band from the seventies known as The Guess Who. Here's a chance to listen to their song, Share the Land. 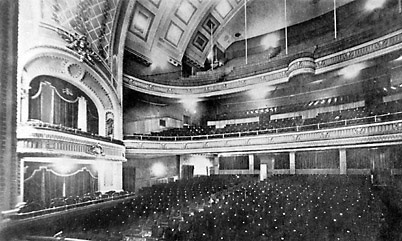 The reason I'm sharing Burton's theatre now is because he's been in the news lately. You see, Burton was a high school dropout. But this past June, he (and my youngest daughter) both received their high school diplomas - only not at the same school. His school was St. John's High in the North End - which even back in the 70s was notorious for its rough edge.
My question is this. Does someone who has not fulfilled the requirements of a high school diploma, deserve one? Of course, Burton Cummings moved on to become successful without finishing school. But what message is that sending to young people graduating today? I'm not sure.
Whatever the answer is, I still want to send huge CONGRATULATIONS to all the Class of 2010! The world is yours!
And to anyone who's interested, here's a listing of upcoming Burton Cumming's Theatre Events.
Visit My Town Monday Headquarters for more inspiring town updates!
at July 04, 2010

I am learning so much about Winnipeg!! And, uh, no, I don't think we should be passing out high school diplomas to those who didn't do the work. Much as I was a Guess Who fan. That said, is it a special honourary degree? Don't colleges do that? As usual, a great My Town Monday post!

I love The Guess Who and Burton Cummings. The theatre is lovely, but I'm with you, I'm not sure about giving him a diploma...on the other hand public figures get honorary diplomas from big Universities all the time.

I agree with you on the diploma as it doesn't provide a good example. I have an acquaintance who has no high school diploma, yet she's in a management position in a high profile firm which normally requires university if not a degree.

Love the architecture of the inside.