My Town Monday and the Red River Cart 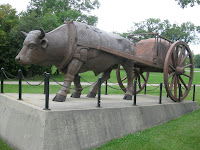 My town, Winnipeg, grew up in the clay-filled Red River Valley. And before there were trains, like the Countess of Dufferin, there were carts. The carts weren’t available at the local cart dealership - they had to be built from the materials at hand. And so the Red River Cart, pulled by horse or by ox, and built of local hardwoods, was created to suit the local environment. It became a common transportation vehicle for fur traders, and later, settlers, on the prairies.

The cart had two large wheels (three to six feet in diameter), and was entirely made of wood. No nails. (No nail factory around, yet.) It was held together by leather, easy to repair, and so versatile, it could be made into a raft by taking off the wheels. (Why don’t we have cars like that today?!) The carts were said to be very squeaky, especially when traveling in caravans of up to 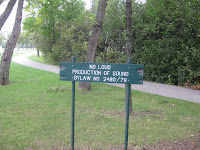 two hundred. The wheels couldn't be greased because of all the dust. This squeal became known as ‘the Northwest fiddle’ and could be heard for miles around. Ironically, just a few feet away from the cart sculpture, I found a sign banning 'the production of loud noise'. Standing there, I imagined hearing a ghostly squeak from the past.

By 1869, trains and steam boats, gradually began to offer settlers and business people alternative transportation. Peace and quiet returned to the back roads. But in some fields, the deep ruts from the Red River carts continue to resist the farmer's plough.