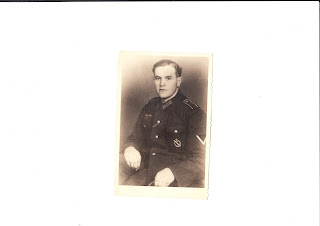 Today was once my Uncle August’s birthday. ‘cept he died and stopped counting birthdays. My mom says he came home (Kreuzberg, East Prussia) to visit on his 21st birthday – November 11, 1943 – and disappeared soon after – missing in action for Hitler’s lost cause.  I don’t know where he’s buried. Somewhere on the Eastern front, I suppose. Thanks to the internet - his name exists - even if his body was never found. Check here for the stats on his birth and death.  His name is listed at a Russian memorial site called Sologubovka - near St. Petersburg.

My friend, Sara, has just published a book, Jimmy Muir from Trois Rivieres, about another young man's war death. He was a fighter pilot  – and was once her mother’s boyfriend. This is a poignant, sad, love story and a well-researched tribute to a young man who was fighting other young men – like my Uncle August.  Jimmy’s buried in Belgium, far from his home.

Twenty-something and dead. Lives unlived.  I’d like to think that if both had lived, they might have become friends here in Canada where people could start over.

Beautiful photograph of your Uncle August, Gabe. How sad, another handsome young man lost to war. It's wonderful that you baked a cake to remember him on his birthday!

Beautiful photograph of your Uncle August, Gabe. How sad, another handsome young man lost to war.