More than a quarter of a million displaced Europeans came to Canada after the Second World War. My parents traveled as newlyweds on the Beaverbrae, a converted freighter, in 1953. They left Bremerhafen and arrived in Quebec City on July 20th along with seven other family members. These included my mom’s brother and his wife and two adult children, my mom’s sister and her new husband, and my mom’s single sister. 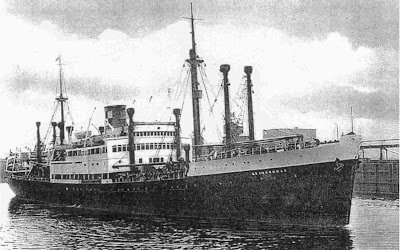 These nine people had all gone through horrendous things—and it wasn’t all connected to the war. My mom’s family had been kulaks in the Soviet Union and so their troubles started back in 1930 when the farms were collectivized. They’d made their first refugee trek back in 1932 to East Prussia. Later, they tried to flee the Soviet army in 1945 when it advanced on East Prussia, but were unsuccessful. Today that part of eastern Europe belongs to Russia and Poland.

Their troubles didn’t end with the war.  My mom was a POW in a Soviet labour camp in the Ural Mountains until 1947, while my aunts and cousins worked on a kolkchoz until 1948. The time under the Soviets was something my aunts refused to talk about it.

When they were allowed to leave East Prussia, they entered the Soviet zone of Germany and crossed the border illegally into the British zone. They did not feel welcome in West Germany.  The war-torn country was over-run with refugees, making the decision to immigrate to Canada not that difficult. They had, literally, nothing to lose.

My dad, on the other hand, came from the Schleswig-Holstein area. His losses were of a different kind. He had been in the Luftwaffe and later, after a crash and a long recovery, was sent to the Eastern Front where he was captured and then spent five years in a Soviet POW camp. Upon his release, he discovered that his former wife had not heard from him and so was in a new relationship. With both their young children dead of starvation, they agreed to divorce. So when my parents met, married and emigrated, they were both middle-aged.

I still have their wooden trunk with the destination label on it. What was in it?  Their wedding china for starters. (Seems to me dishes were a lot more important back then than now.)  A few clothes and a few photographs. I still have the smart-tailored suit my mother bought for the journey. They brought a feather duvet along, with matching pillows and a beautifully embroidered tablecloth that both worked on during the voyage. It's one of my most prized possessions, symbolizing their journey together.

Here are some memories that my cousin, now in her eighties, and the only surviving family member of that 1953 Beaverbrae trip, shared with me last weekend. She was twenty-two on that boat.

She said the trip cost $400 per person and took 10 days from Bremerhaven to Quebec City. There were 9 to 12 beds in a room. Three layers of bunks. Women and men had separate quarters. No windows. Barely any walking room. Stifling air. Sea sickness. She remembers two young women who were chewing on some kind of green herb who didn’t get seasick.

My parents took work as farm labourers near Morris, Manitoba after they arrived in Canada. In the fall, they moved into the city and my father worked on construction projects. They had intended to move to Kitimat, BC the following year, after my mother’s difficult pregnancy (with me) was over. That’s what the other family members did.  The Alcan smelter was opening up and needed workers. However, by the time I was born in June, 1954, my father felt confident in his job opportunities and so they stayed in Winnipeg.

My parents were extremely proud to be Canadians. They were excited to get their citizenship papers and to belong to a country that gave them plenty of opportunity to prosper. They worked very hard, but they had a good life—a very good life—in their adopted home. It didn’t taken long and they had a brand new house, a cottage, a boat, a couple of vehicles, etc. My dad loved the multi-cultural aspect of their chosen land.

And I’m glad that the Beaverbrae brought them here, because I think Canada’s a pretty amazing country to live in. That seasick voyage was definitely worth it. But what were those women chewing?

On October 3rd, there’ll be Beaverbrae reunions happening in several centres across Canada. The one in Winnipeg is slated for the Lutheran Church of the Cross, 550 Arlington Street from 2-4.  It should be very interesting!
at August 20, 2015