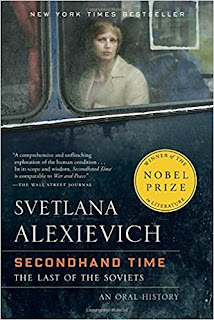 One of the best nonfiction books I’ve read in the last year is Svetlanana Alexievich’s Secondhand Time. I’d never even heard of it until I accidently came across it when I was looking for something else. It’s a New York Times Bestseller and a Nobel Prize winner. Shows how out of touch I can be, even when trying to stay on top of books about one of my favorite topics: the former Soviet Union.

Better late than never.  The book first came out in Russian in 2013 and the English translation came out in 2017. So I’m not that late to the game—just seems I was so aware of Anne Applebaum’s Red Famine, (visit link for a controversial review) when it came out in October, 2017, but missed out on this one.

First of all, because it’s an oral history, its style is informal and direct.  The conversations that Ukrainian-born Alexievich shares happen around kitchen tables and on the streets, throughout the former Soviet country. This makes them, perhaps, a bit scattered but certain themes are repeated over and over.

The book is divided into two parts: the first half focuses on 1991-2001. It’s the honeymoon period of life after communism. The second part focuses on 2002-2012—the new Russia—when the rose-colored glasses of capitalism have cracked.

And still so much soul. What is it about the Russians and their passion for life? It’s so strong, in spite of—or maybe because of—the suffering every family has witnessed.

I have many favorite quotes, but I’ll share one from each section. First: “People don’t remember the bad things too often anymore, now they’re just proud of the Victory and the fact that we were the first ones in space. The empty stores—that’s all been forgotten. . . “ (page 139).  And from the second half, a quote from a Russian immigrant to the States: “The people in Russia are magnificent, they’re treasures, but you can’t live there.” (page 383).

This book helps me to understand the present-day Russia. . . a country that's always full of surprises. We’re often smug about our western world, think we’re so much better. But this book showed me real people and not just a political system. Highly recommend it.
at February 27, 2018