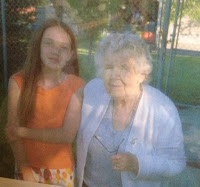 Mom was tiny…under five feet…but she had a big life. After all, her father was once a landowner with a windmill back before collectives and kulaks. He dreamed big…until the liquidation of kulaks crushed his windmill, his family and finally his life during the Great Terror.

Mom reached her tiny adult height at the age of twelve. The orphaned kids moved from Siberian exile to the prosperous Third Reich. But life under Hitler was no better than life under Stalin. Mom worked long hours in a munitions factory in East Prussia, then spent the winter months of 1945 trying to flee the Red Army. She failed. After spending two and a half years in a forced labour camp in the Ural Mountains, she kept putting one foot in front of the other until she ended up here in Winnipeg. Winnipeg in the mid-50s welcomed big dreamers—even little women—and Mom had enough life savvy to prosper.

While she never became fluent in English, she understood finances. Interest payments were evil. Mom never owned a credit card—never understood their purpose. All those years of powerlessness gave her a steely determination to never be poor or hungry again. Within twelve years of arriving in Canada my parents owned a mortgage-free, new house; soon after that, a cottage. We always had a car and a truck—later, a boat and a snowmobile. Zero debt. My parents traveled back to Europe, down to Florida and often to BC.  Mom worked hard for those material things. They were important to her. But she could never regain the family that she’d lost.

As a child, I resented her workaholic attitude and miserly ways. After all, there’s more to success than just material goods. In many ways, I was under pressure to also have material success. To study literature and strive for an artistic career was beyond Mom’s comprehension. I let her down. She once complained, “I never survived Siberia so that my daughter could freeze on the streets of Winnipeg.” (I worked as a mail carrier to pay the bills that my literary ambition could not.)

I never knew how hard it would be to achieve my writing goals. But my mom taught me to never give up. And on this, the seventh anniversary of her death, I remind myself to keep going—to keep chasing that dream—step by step, word by word, book by book. And for that determination, I thank her.

Your mom had a feisty spirit. You definitely have her determination.

Wonderful tribute to your mother. I would have liked to meet her.