While sorting through travel photos the other day, I lost at least half of them. Don't ask me how I did that. I'm visiting my local computer place this coming week and hope they'll be able to help this luddite. 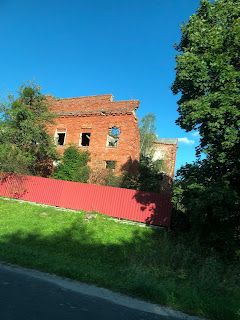 Rather than risk losing more, I thought I should post my favourite photos right now.

My cycling trip through parts of the former East Prussia (now Kaliningrad Oblast, Lithuania and Poland) retraced some of my mom’s life while living in Kreuzburg (now Slavskoye) between 1932 and 1945.

The village of Slavskoye is an almost thirty-kilometer road trip south of the city of Kaliningrad (called Königsberg until 1946 and renamed in honour of a Soviet politician who died that year). The traffic, exiting Kaliningrad (pop. about 450,000) on a Friday afternoon was horrendous. What should have taken half an hour, took more like two hours. Our minivan driver, Igor, seemed nonchalant about it all, but I felt bad for this detour he was taking on my behalf.

Once we arrived is Slavskoye, however, it was all worth it. The village, in a state of ruin ever since it was caught between the advancing Soviets and the retreating Nazis back in the cold winter months of early 1945, has no main store or business, but some of the houses have been restored by their proud Russian owners. Yes, this is Russia and all the Germans are gone. Still, I hoped to find some traces of my family.

It was a beautiful day in early September and flowers bloomed in colourful profusion over rickety fences and along the sides of bullet-scarred houses. Almost seventy years after the war, this part of Europe still sits derelict and mostly forgotten.

The school my mom would have attended—albeit for a very short while because her coldhearted aunt thought the twelve-year-old girl should work, rather than become book-smart—stands pockmarked with bullet holes. I read somewhere that Wehrmacht soldiers had retreated to the school as a last defence. It looks like someone now lives in on the right end where new windows have been installed. 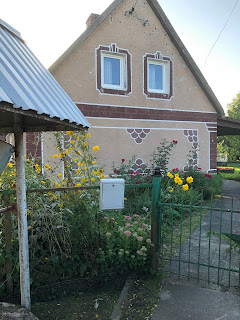 And then I found the house her family built—still standing—at the end of a road with a well in front. Just like I’d been told.  It was one of the better maintained houses in the village. An older man, a Volga-German who’d once been exiled to Kazakhstan, was the proud owner. He invited us in for tea, but unfortunately, because of the traffic jam issues, we were short on time. I could only thank him for the outside tour. 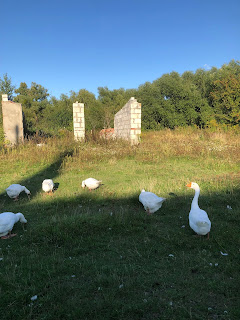 Then his elderly neighbour called out from over the fence, where she was mostly hidden by an apple tree thick with fruit, why weren’t we coming to visit her. Very friendly people who rely on their gardens to supplement their meager pensions. I left Slavskoye feeling that my family’s former home was in good hands. It’s too bad politicians can’t fight their wars on chess boards. My family, like these Russian settlers, were mere pawns in those horrible battles.

Amazing post, Gabe! I'm in such wonder to get a glimpse of your trip and just wow's that you find what you're looking for!

Welcome to winter. Three or four inches of snow cover everything. Of course. It’s April in Winnipeg, so we’re not surprised. The German’s ha...