The recent death of the great actor, Christopher Plummer—may he rest in peace—reminded film-goers all over the world of The Sound of Music. For me, the movie’s up there with Dr. Zhivago as an all-time favourite. I was at the impressionable age of ten and eleven when The Sound of Music played for more than two years at the Kings Theatre in sunny St. James. Movies were not part of my growing up years . . . they were considered too worldly by my church . . . but after a year of begging, I finally got to see this one. The sinful pleasure was worth the long line-up.

Over the years, I’ve re-watched The Sound of Music as a school musical (one daughter got to know and love the songs), as a dress-up, sing-a-long at the old Globe Theatre in downtown Winnipeg, and as a performance at Rainbow Stage . . . where I got to bring a carload of seniors, excited like teenagers at the evening out. I think that’s what I loved so much about the musical . . . it was for all ages. 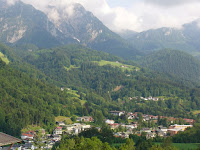 I suppose the most powerful Sound of Music experience for me was during the time I waited on tables in the Berchtesgaden area (half an hour from Salzburg) and regularly hiked the hills that the film opens up with. I turned twenty out there during a student work program and spent the afternoon of my birthday walking in Maria’s footsteps, traipsing through alpine meadows and feeling on top of the world.

Hitler’s mountain wasn’t far away. I could see it when the clouds weren’t hanging too low. Back then, I was still too young, too inexperienced, to have more than a glimmer of understanding about how the war had scarred the world and also my own family. But even then, I was quite aware that evil minds appreciate beauty as much as good minds do. In that perfect landscape, where “the hills are alive with the sound of music,” Nazis nurtured plots of world domination and destruction. If evil can lurk in such beauty, the reverse must be true. Goodness can be found in the ugliest corners of our world.

I never found any edelweiss on my meanderings, nor the blue alpine flower called enzian—although I often served the Enzian Schnapps made from its roots. I’d like to go back. In the meantime, maybe I’ll just listen to Christopher Plummer singing Edelweiss.  Wait, he didn’t actually sing it, did he? That makes him and the song even more endearing.

Email ThisBlogThis!Share to TwitterShare to FacebookShare to Pinterest
Labels: Berchtesgaden, Edelweiss, The Sound of Music

Welcome to winter. Three or four inches of snow cover everything. Of course. It’s April in Winnipeg, so we’re not surprised. The German’s ha...