It's cold here in Winterpeg, Manitoba. Minus 27 C or -37 with the wind chill (that's meterological-speak for what it feels like depending on the wind speed). But the sun is shining and after the recent snowfall, the world outside my window looks cheery and bright. Dog walks are fast, my car gets pre-heated (even the seats and steering wheel!), I have a pantry stuffed with food, I have hot tea and lemon, my summer geraniums are still blooming in the January sunshine . . . in short, I can’t complain. I’m even triple-vaxed. 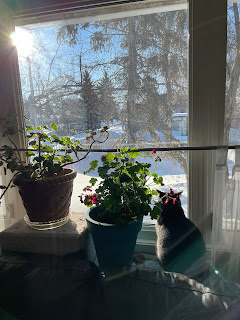 But my bubble of security and domestic bliss is just that . . . a bubble. There’s a scary world out there. Most disturbing to me is the build-up of the Russian army on Ukraine’s borders. Ukraine, where my mom and grandparents were born, where my grandfather died, where the family windmill once stood.

Ukraine means borderland. I’ve always considered myself a fence-sitter, enjoying the views of both sides of many aspects of life, and can appreciate the precarious and lonely nature of such a position. Ukraine wants to be part of NATO, to belong to the west. Russia says, never.

At the very least, a cold war appears in the offing and my heart breaks for the Ukrainian people. The Russian leader, full of nostalgia for the Soviet state, wants to prove that his country still has the power to create fear. How many troops now?

77 Januarys ago, the Soviet/Russian Army instilled great fear in my mom and her family. While Hitler focused on battling the Allies on the western front, the eastern front was exposed to the Soviets and East Prussia quickly crushed. My new novel, Crow Stone, (Summer, 2022), imagines my mom’s efforts in January, 1945 to avoid the Russian/Soviet army which is again itching to advance.