I eagerly anticipated reading The Singing Forest by Judith McCormack. There was a long waiting list for it at my local library and when my turn finally came, I closed my other books and focused on this. About a third of the way through, I grew restless, disappointed and turned for other opinions on Goodreads. Very mixed reviews. I decided to soldier on and I’m so glad I did.

The Singing Forest is set between contemporary Toronto and pre-war Belarus. The two main characters, Leah, a young lawyer, and Drozd, former NKVD chauffeur from Belarus. Both characters have fathers who have failed them. Both are trying to prove themselves. Leah, through justice; Drozd, by instilling fear in those around him. While the complicated Toronto scenes slow the story down, with three uncles, a love interest, and the lawyering, the Minsk scenes kept me reading. I found Judith McCormack’s ability to get inside the villain’s personal headspace allowed me to understand, but never to condone, the cruelties done under the pretence of Stalinism.  Drozd wasn't a communist, he was a survivalist. 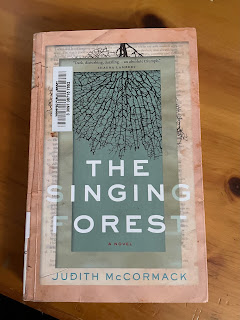 My grandfather, a kulak, was also tortured and killed under Article 58, counter-revolutionary activity, during the first summer of the Great Terror. He was jailed for two months and interrogated via troika.  His trial took place in Zhytomyr, about five hundred kilometers south of Minsk. There’s good reason why Timothy Synder refers to these areas as ‘bloodlands.’  McCormack’s novel opens strong with the random discovery of a skull by some boys out mushroom hunting in the Kurapaty Forest. It ends with an online meeting that left me hanging. But perhaps unresolved is the only way to end such a complicated story about faded memories.

Our pity for the little abused boy that Drozd once was morphs into disgust as we see his survival instincts destroy those close to him. Monsters are often created during childhood. People who are hurt often hurt in turn. The cycle of violence goes on, ruled by fear.

I’m glad I read this book. Now I want to read Lynn Viola’s Stalin’s Perpetrators on Trial. I know that at least one of the troika involved in condemning my grandfather, a NKVD officer called Maniko, in the documents I copied while in the Zhytomyr archives, was condemned in 1940 for falsifying evidence and beating the prisoners.

And now the same areas are once again struggling. The cycle of violence continues.

P.S. I'll be watching for McCormack's next book.