Rest in Peace ... Live in Peace

The story of Crow Stone … out in just a few days … begins on November 11th, 1944. Here’s the opening paragraph. 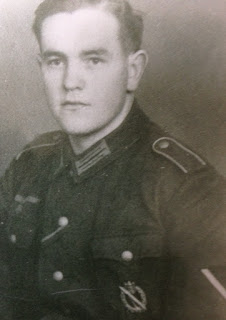 November 11. Today is Albert’s twenty-fourth birthday and he’s coming home to celebrate. Well not home, home, but what’s become home—Königsberg here in East Prussia. I’m meeting him at the train station, the same station where we arrived when we were homeless children—kulak orphans. Will I even recognize Albert? The men all looks the same in their grey field uniforms.

His brief visit will be the last time he gets to be with his family. Inspired by my mom’s real brother, August, he soon disappears into the quagmire of a Soviet Union prisoner of war camp. 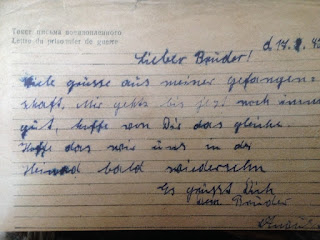 Two months later on a Red Cross/Crescent postcard, dated January 17, 1945, he writes, ‘Things are going well so far, wishing the same for you. Hope we can soon reunite in our homeland.’ Well, there was no homecoming, no home to return to, and no future.

This Remembrance Day I want to remember that war kills. It kills the enemy, the hero, the child, the old woman, and the family dog. War doesn’t focus on a uniform or on an age.

In Prussian Nights, a narrative poem composed by Solzhenitsyn and committed to memory while he was in the Gulag after being accused of empathizing with the enemy, he remembers war.

Some soldiers have gathered round

A pram that’s been abandoned,

He’ll grow and put a helmet on.

Deal with him now, d’you think?

The order from Supreme Command

Rest in Peace, Uncle A. Let me never take this living in peace for granted.