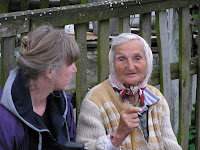 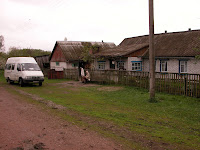 First Saturday in November. November has got to be the most melancholy of months - the month squished between the gold of October and the snow of December. Any day now can bring the beginning of winter. Transition is always hard.

I think the weather in Ukraine is quite
similar to ours here on the Canadian
prairies. Not as harsh, of course. (We
prairie people like to think of ourselves
as tough.) But what do we know of winter
here with our centrally heated houses,
cars in driveways, warm clothes
and food-a-plenty?

Here's a photo of Helena Nickel. I met her in the
little village of Kaliniwka (about 35 kilometers north of
Zhitomir). This place was once called
Federofka (also spelled Federowka or Federoufka).
Exploring the past in the former USSR is
challenging - not just because of the politics,
Russian and Ukrainian languages, and the
Cyrillic alphabet, but because of the name
changes).

This is the village where my mother was born
in 1919 and my grandfather in 1875. It was
once a vibrant place. In 1911 it had 615 people
and 65 houses. When I visited in 2004,
it was an almost empty place with rampant
alcoholism (homemade vodka),
recent suicides, and extreme poverty.
There are few men and the women work
so hard just trying to survive.
With the fall of communism, there is no
collective farm and no employment. I can't
imagine the hardship of winter
in Kaliniwka.

Communism is over, but the transition
has hit the villages and the old people
very hard.

Talk to you soon. (I want to tell you more
about what I learned from Helena).
gabe

Word of the day:
Transition - a passage from one state, stage,
or place to another: change
from Webster's New Collegiate Dictionary
at November 03, 2007

Very hard life, so sad, yet beautiful photo of Helena!

My mother-in-law Lydia was born in Federowka in September 1919. I am doing a scrapbook on her right now. She's celebrating her 90th birthday soon and I was looking for more information on the towns she has lived in. Thanks for the blog!