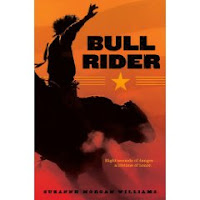 I especially like reading books by people I've met - either for real, (of course, that's the best), or through the internet- (which is becoming a great substitute).
So, last year about this time, when I was still in the forming class of 2k9 (and yes, I'm a dropout :( - sad, but true - twas a hard decision), I was able to have dinner with the author of the fabulous new release, Bull Rider. Suzanne Morgan Williams was en route from the high Arctic back to her home in Nevada - and my city of Winnipeg was an overnight stop for her.
Who'd want to go to the Arctic in March? Global warning researchers, perhaps? Russian spies? Polar bear enthusiasts? Snowmobile test drivers? How about a children's book writer? Yes, Suzi was researching another novel. And now that I've read her first book, I'll be sure to watch for her next one.
Bull Rider covers a lot of territory. There's the whole issue of young men going to fight wars and coming back forever changed. Then there's the exotic world of bull fighting. Now this is something I've only seen on TV - I can't imagine a more crazy 'sport'.  But the way Suzi develops it in the book, I could actually begin to understand the rush that attracts young males.
Then there's the topic of traumatic brain injury (TBI). That really intrigued me because my husband is a TBI survivor. It's a difficult injury because a) it's invisible; b) it goes on and on and on, and c) it's subtle and different for each individual. Suzi obviously researched her subject!
I was so impressed with Suzi's ending. Ben, her TBI survivor, is not given a story-book ending. And that is the strength of Bull Rider. There are no happy endings. No easy solutions. Just the victory of trying (kind of like staying on a bull). Wonderful metaphor. Hey, and it applies to the writing career, as well. Stay on. And if you fall off, get back on.
Thanks, Suzi! All the best.
at March 22, 2009

Hi - I try not to be the first to comment about a post about my work - but I had to say "Hi Gabe!" I'm thrilled you liked Bull Rider and it's also very satisfying that you say I got the TBI right. That was a tough research job - the injury, as you say, is so difficult. Thanks for the post, and I hope to see you in Winnipeg next time I'm passing through.

Hi, Gabe! Thanks for the visit and comment on my 1877 letter post. I've responded in my comments about the watermelon syrup. Let me know what your mother has to say.

Cool review, Gabe. I'm looking forward to meeting Suzi in Sept at a conference. She sounds like quite a neat person to meet!

What a great review. I'm definitely reading this book. It sounds nice and complicated which I'm very in the mood for.