Just read a book that I had to order from Germany - therefore the cost of delivery was more than the book itself. But the price was well worth it. Die Frauen von Janowka (The Women of Janowka) by Helmut Exner drew me in quickly and kept me turning pages until the end. While it's a 'roman' or novel, it's more of a family memoir and is filled with photographs, maps, and brief lifelines of the individuals, to help the reader along. I found myself constantly go back and forth, checking the photos and maps to review the who's and where's. I found this immensely helpful.

One of the main characters is the author's grandmother, Serafine, and her parts of the book were my favorite. The Russian part of the story happens before my own mother is born. It's about the exile of thousands of Germans to remote parts of Siberia during WWI.

This book is dear to my heart because it's also my family's story. Like the author, I too have family spread all over the world - family that shared beginnings in Volhynia. What really brought this story close to me was not just the beginning, but the ending - specifically, the last photograph in the book. It's of the Brokenhead River by Beausejour. Next weekend I plan to drive out there - it should be a less than two hour drive. The family that started off by a river in Volhynia (once in Russia, later in the USSR, now in Ukraine), now has some of that family farming in my own province.

One of the book's strengths was the humorous banter between the couples - led by the Exner men - and passed on through the generations. The author did a great job in giving life to his deceased family members. An excellent read, all around. (Also, considering my German isn't as strong as it used to be - the language flowed and was quite accessible.)

You're able to read books in German? You are so impressive!

I wish I could read more languages - esp. French!

I have a copy in German and read it with great interest, but the book has now been translated!

Helen, I helped with the English translation. Helmut Exner is a superb writer, both
funny and sharp-witted. His son Sasha is pretty amazing, too. Exner's crime series
is very entertaining writing. Highly recommended. 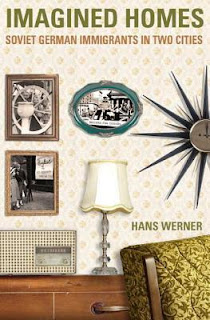