Back when I was a kid, belonging to a youth group was common, and so was wearing a youth group uniform. My church-sponsored youth group was the Pioneer Girls. with Pilgrims being for the younger girls and Colonists for the older ones. We had a lot of fun. Working on badges, going camping, having singsongs and making things. I was totally involved.  Of course, being a church-sponsored organization, it did have an underlying motive. It wasn’t just about having fun and learning new skills. It was about absorbing an evangelical Christian doctrine.

My own children started off in Girl Guides and Boy Scouts. After a few years, their interest waned and I didn’t encourage them. I began having my doubts about the badges, the marches and the salutes. To the cynic in me, it all smacked of militarism.

And so, my kids traded in their uniforms for team jerseys. Camping trips turned into tournaments in other cities. The great outdoors became a soccer pitch, a baseball diamond, or a chlorinated swimming pool.  Competition became more fun than co-operation.

When I asked one of my kids about her memories of belonging to Girl Guides, she said they were good memories. It was mostly about the friends.  And when I look back, I remember much of the good things, too. That’s where I learned how to crochet, to embroider, to make a fire, to share a good ghost story.  I made a lot of friends too and had some exciting adventures.

By joining a soccer team, kids gain physical fitness, learn to be a team player, learn self-discipline, make friends and grow as people. They don't  learn how to crochet or make a fire.  But then, I guess those skills aren’t necessary anymore. Me? I’m grateful for them anyway.

Why am I meandering on about youth groups? Because I’m looking into the BDM (aka Bund Deutsche Maedchen)—the Band of German Girls—especially during the Nazi, pre-war years.  The BDM was a highly structured organization open to girls ages ten and up. Their joining date would be on the eve of the Fuhrer’s birthday in April.  When they joined they became “property of the Fuehrer.”* 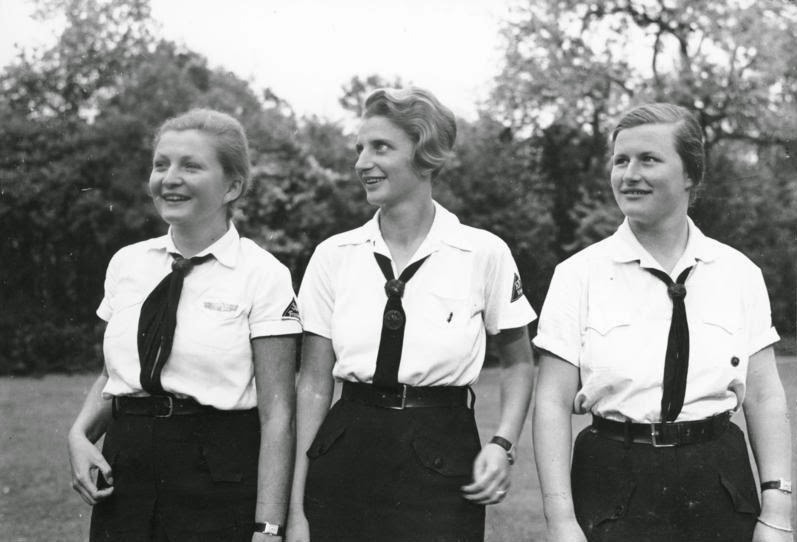 Belonging to the Hitler Youth became mandatory in December, 1936.  For two hours a week a girl would hike, camp, do sports, home economics, music and handicrafts, all the while being immersed in the Nazi principles of race. The goal of the BDM was to form young German girls who would be “physically healthy and strong, and to become the mothers of the future Nazi generation.”*


Kids are sponges. They soak up anything and everything. What a gift to us adults—and what a responsibility.
at December 01, 2014

I went to Pioneer Girls too -- learned to hand sew a button hole and to darn a sock. Have never done the former since, but once or twice the latter!

I went to Pioneer Girls too! That's where I learned to hand sew a button hole, not that I've ever done once since, but also embroider, which I did do later.