When I was almost ten, my parents moved into a spanking new house in the suburbs of Winnipeg. The neighbourhood was stuffed with young families and we had many a mud fight in between the mounds of construction gumbo. I learned the hard way that the pink insulation might be great for bouncing, but not so good for bare skin. There was a real comradery amongst the neighbours…we’d all moved in about the same time…and I was happy. Of course, there was the issue of my parents being German, and some kids called them Nazis. My friends were scared of Dad when he marched down the street hollering for me at sunset. His broad accent and his military strictness sometimes hid the loving, soft father that I knew. 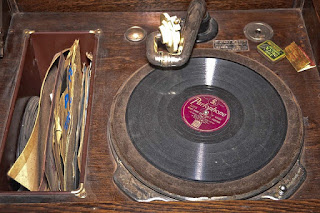 A favorite place in that new home was the rec room Dad built. In the rec room we had a record player and while the rest of my friends were buying Beatle and Monkey records, I was discovering my dad’s old German 78s. (Our family belonged to a fundamentalist church and any kind of rock music was considered sinful. Yes, sad but true. That’s a whole other story.)

I played those old German songs over and over. Tangoes, seranades, operettas, folk music, songs of yearning…songs filled with Sehnsucht.  I organized them, catalogued them and secretly danced to them. My parents were too busy working, cleaning, growing tomatoes, playing crokinole, or fishing to listen to the old music. I inhaled it. Then one day, I accidently stepped on a pile of them and for years I couldn’t hear them anymore, but they played on in my mind.  Now, with YouTube they are so easy to find and I can’t keep a good thing to myself.

I’ll start with the ever-popular song, Lili Marlene. It was made famous in 1938 by the singer, Lale Anderson. The lyrics, however, were written during the First World War in 1915 by Hans Leip—schoolteacher and conscripted soldier. The name, Lili Marlene, is a combination of two of his female friends. Norbert Schultze created the melody in 1937. It’s kind of interesting how it took more than twenty years for a simple poem to become a song. And then, when it was released, not too many paid attention. By 1941, less than a thousand copies had sold. But then, Radio Belgrade—which broadcast to soldiers on duty—took a fancy to it and the song took off. After some wrangling with a reluctant Goebbels, it became the signature sign-off song when the station retired at ten every night.

In 1942, the British discovered the song and Lale Anderson released an English version.

The song reached even more troops when Marlene Dietrich recorded it in 1944 for the American Office of Strategic Service as part of the Allied propaganda effort to discourage German soldiers.

An amazing song. An incredible time. I like Lale Anderson’s version best. Her voice is beautiful. But here’s Marlene Dietrich, with her rendition. It’s an evocative song, either way. And when I was twelve years old, down in the new rec room in suburbia, it made me cry, made me dance, and filled me with Sehnsucht for a time and place I couldn't grasp.