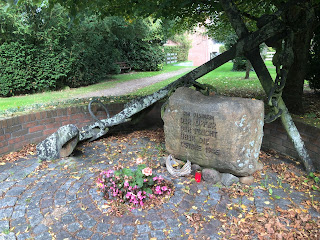 While wandering through the Schleswig-Holstein cemeteries, I found a few memorials dedicated to the Second World War. One was remembering those lost at sea during Operation Hannibal.

Operation Hannibal was the 1945 desperate naval attempt to save civilians, stuck in East Prussia, from the Soviet advance. My mom wanted to board one of the ships . .. the Wilhelm Gustloff, (read Ruta Sepetys's amazing novel) or the Steuben, or maybe the Goya . . . waiting in the Pillau harbor. Mom never made it across the Vistula Lagoon and instead ended up in a Ural coal mine. 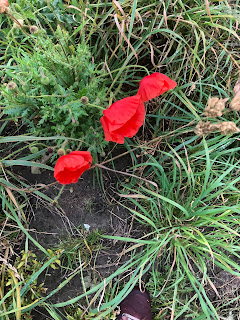 Later, while biking back, I found poppies growing on the side of the road. Poppies—a Flanders field icon—and a poignant reminder of the paradox of life. Fragile and yet so tenacious. This was fall and the poppies were re-blooming. Maybe just for me? Those poppies belong to my dad's past love. But that's another story.Red poppies, red stones. These are the travel souvenirs that I treasure.