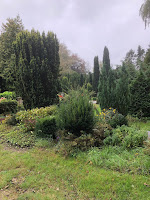 I enjoyed hearing a podcast about cemeteries as travel destinations the other evening while out dog walking.

Last year I visited a few graveyards in northern Germany looking for neglected relatives. Since the living ones I’d been visiting weren’t too interested in the old stuff, I toured on my own.

The graves of my dad’s parents, buried in Schleswig-Holstein, have disappeared through neglect. Seems like nobody’s wanted to remember them and graves in Germany have a limited shelf-life of up to thirty years. So even though I had this nostalgic notion of finding my long-lost grandparents, I only found a few random Schröders in the Wesselburen graveyard. Maybe some of them have a family connection, but I’m not enough of a genealogy sleuth to find out. 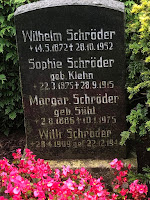 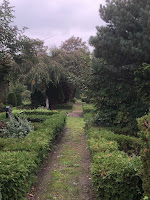 Instead, I enjoyed the company of the old cat who guided me amongst the graves. I noticed he had a decent little house for inclement weather.  The cemetery itself was quite beautiful and I enjoyed spending time in it. It’s much more park-like than the ones I’m used to here in Canada which are wide open with only cut flowers adorning the graves 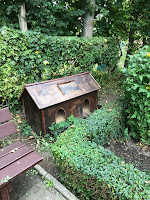 As I ambled along the paths, imagining past lives, the orange cat followed. But the weather—suitably grey and misty—soon turned to rain. So I got back on my bicycle and the graveyard cat retreated to his shelter.

Happy hauntings. May the dead rest in peace. 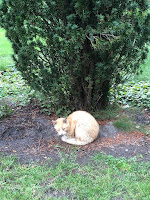