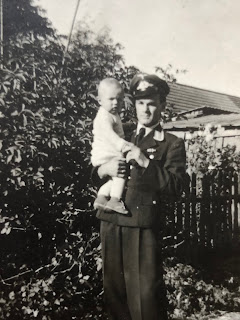 I have no photographs of my dad’s first marriage. The only photos I have of that 1940 union is of a gravestone for Wilhelm, who died as an infant, and another one where my dad holds a toddler. Two young boys. And my dad was their father? How could this be?

I only got to see this photo once when I was growing up, while hiding under the dining room table. My hiding place was discovered and the album grabbed away from me. (The same thing happened when I viewed a medical book with nudity in it). It was enough to ignite my imagination.

Who were these little boys? Why was a photo of a baby’s gravestone in the family photo album? No one would tell me. It was just one of those secrets that kids weren’t supposed to know and you know how it is about secrets . . .. It’s a challenge I’ve embraced and explore by writing my novels. My current work-in-progress focuses on my dad’s broken first marriage.

The Nazis were all about strong families, with programs to keep mothers pregnant and in the home. It’s ironic that after the war there was a higher than normal divorce rate and my dad’s first marriage was one of the casualties. He married Lydia in 1940 when mass-weddings were popular. Armistice Day November 11th—was a popular choice and each couple received a copy of Mein Kampf as a wedding gift. It was required to prove Aryan-purity and acquire an Ahnenpass —proving Aryan heritage
—before getting the marriage license. The Nazis wanted their soldiers to impregnate their Aryan women and produce new soldiers for the Third Reich.

My dad and his first wife created two potential soldiers. Unfortunately, with the ultimate failure of Hitler’s ambitions, the two little boys died in the final months of the war. My half-brothers never got to grow up in Hitler’s planned utopia. No doubt, their deaths helped in the dissolution of my dad’s first marriage. Another factor was his five-year-long silence. As a prisoner of war, his mailings never made it to his wife and she gave up on him. Found a new lover amongst the Allies who occupied Germany.  My dad returned from USSR in late 1949, and in 1951 the marriage was officially over.

A simple story that was never shared with me. I had to be a sleuth and figure it out on my own. Now it’s fodder for my writing brain. German readers might consider Heimkehr, 1948 edited by Annette Kaminsky where a collection of essays describes the broken marriages faced by returning prisoners of war.

What an incredible story Gabe! Is the piece you were working on for Sage Hill? I hope you will share some of it with our writing group.