Growing up without grandparents has only increased my need to know who they were. While I've sort of figured out my mom's side of the family and how they were affected by the Stalin years, my dad's side has remained elusive.

I’ve been working on a novel partially set in northern Germany, where my dad was born back in 1918. One thing leads to another—as things do during research and writing—and I’m wondering, what would daily life have been like for my grandmother, Elisabeth,

when she was a young mother.

Germany had just lost a war and my grandfather had returned from it with serious injuries. He became mostly bedridden (although that didn’t stop him from fathering five children). Hyper-inflation destroyed family finances. Not only that, but in 1918 the Spanish Flu was raging across Europe.

I never met my grandmother and she died before I started school.  When I asked about her,last year while visiting Schleswig-Holstein, she was dismissed as a bitter, unloving woman. 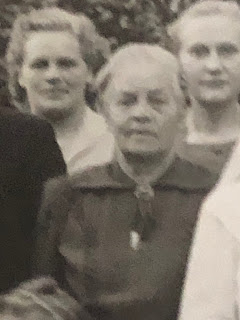 But my curiousity is piqued. People aren’t born bitter. Personalities are created—at least partially— through relationships and circumstances. Because she played an important part in the dissolution of my dad’s first marriage and thus in my own life, I’m now hooked. Another mystery to explore.