A Tale of Two Frankfurts 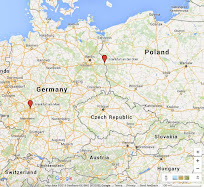 One place that’s confused me during my research into my parents’ history is the town of Frankfurt. It served as the eye of the needle for all returning German prisoners of war as they left their Soviet labour camps and headed back home. Turns out there are two Frankfurts. Both defined by their rivers.

Frankfurt am Main has the Main River, a tributary of the Rhine, flowing through it. The city might be best known for its busy airport.

Frankfurt an der Oder is on the Oder River which, for 187 km. forms the border between Poland and Germany.  The Oder river divides Frankfurt an der Oder (Germany) from Slubice (Poland).  It’s a quiet place now, but back in the late forties and early fifties it was a hub of activity.

Returning POWs first stop in Frankfurt (Oder) was the Hornkaserne run by the Soviet NKWD (until 1947). Here they were given new clothes, toiletries and a chance to clean up so they would look presentable for the 3 km walk to Gronenfelde barracks run by a German administration. In Gronenfelde they were divided into destinations and sent further on to their homes. 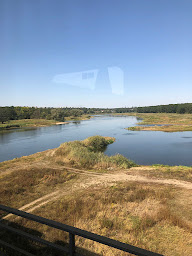 It was a thrill for me, last year, to travel through both Frankfurts and to appreciate the history of Frankfurt (Oder). On the train from Gdansk to Berlin, we crossed the Oder River. I was surprised at how wide it was and how green its banks.  I couldn’t help but imagine each of my parents crossing that same river—Mom in the summer of 1947, and Dad in November, 1949. They were not yet aware that their separate journeys would eventually become one journey, together, to Canada.
at September 04, 2020

So interesting. We took a cruise down the Main River Christmas and before it left from Frankfurt we spent several days touring the city. Now it would be interesting to visit the OTHER Frankfurt.