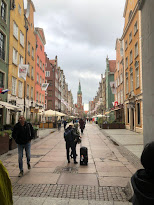 The cities of Gdansk and Kaliningrad (both former members of the Hanseatic League) were each re-built differently after the Second World War. Gdansk, now again part of Poland, has a beautifully restored old inner-city tourist area. Eighty-one Septembers ago, the Nazis had claimed the port city for themselves, called it Danzig and left it largely intact. Not until later, in 1944 and 1945, as Germans civilians fled to the harbour city to get on ships to avoid the advancing Soviet Army,was the city crushed by Soviet bombs.

Last September I was in Gdansk, Poland finishing up a cycling trip. I’d biked in four countries and through some intense family history. The books I’ve read, both pre, and post trip, continue to enhance my appreciation of these lands.

It was also interesting to view Lech Walesa’s shipyard office—the beginning of the end for the Soviet communism. Gdansk—a place of beginnings and ends. 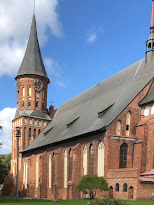 A few days earlier, I’d been guided through Kaliningrad, once Königsberg. It was also destroyed by the Allies in 1944/45. When the former East Prussia was divided up after the war, Konigsberg stayed under Soviet control, and renamed Kaliningrad in honour of a Soviet hero. Because the local population was expelled, there was no effort to showcase or remember any of its history. It wasn’t until the 1990s that efforts began to rebuild the massive cathedral and even honour Immanuel Kant a German philosopher. Once quite revered by the Soviets, he's now causing irritation. Reminds me of our own changing views of history here in Canada.

Our yesterdays are complicated. We can try to erase the past by pulling down monuments, buildings, or renaming cities. It will continue to haunt our present. Educating ourselves is key to awareness, acceptance and finally, action.

Old stuff. So many stories. I was struck by how proud the guides were of both their cities and their complicated histories.